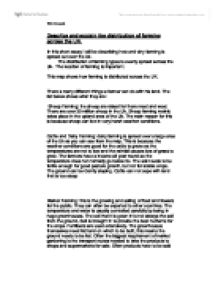 Describe and explain the distribution of farming across the UK

Describe and explain the distribution of farming across the UK. In this short essay I will be describing how and why farming is spread out over the Uk. The distribution of farming types is evenly spread across the Uk. The location of farming is important. This map shows how farming is distributed across the UK. There a many different things a farmer can do with his land. The list below shows what they are: Sheep Farming: the sheep are raised for there meat and wool. There are over 30 million sheep in the Uk. Sheep farming mainly takes place in the upland area of the Uk. The main reason for this is because sheep can live in very harsh weather conditions. Cattle and Dairy Farming: dairy farming is spread over a large area of the Uk as you can see from the map. This is because the weather conditions are good for the cattle to graze as the temperatures are not to low and the rainfall causes lots of grass to grow. ...read more.

Often products have to be sold within 24 hours of being produced. n the UK many farmers combine a number of different farming types in one farm. This is to get the maximum profit out of the farming land. The type of farming that a certain farmer grows depends on the location of the farm and the land that it is on. There are many physical and human factors that depict what a farmer will grow on his land the farmer may have a number of choices over which type of farming he is going to do. Normally this is determined by the climate, soils and the relief. However farmers are increasingly having to turn to farming crops or animals that will bring them the most money, Rather than which ones may be best suited to the area. Money is vital when setting up a farm, or trying to run one. ...read more.

Flat, sheltered areas are usually best for crops as it is easy to use machinery and there will be the climate conditions will be good. Steep slopes are more likely to be used for sheep. However in countries such as Indonesia the steep slopes have been terraced. Soil condition also play a major part in the crop that is grown. Thick, fertile soils are usually best for crop farming. In Britain the best soil for arable farming can be found in Norfolk and other Eastern areas of the country (see map). In hilly areas the soil tends to be thinner and less fertile, meaning it is more suitable for pasture farming such as in the hills in Wales. (see map) Over all the type of farming in the Uk is very varied. It is distributed evenly over the Uk. Many factors effect farming, All of them have to be taken into consideration when a farmer is deciding what to grow on his land. ?? ?? ?? ?? Will Creech ...read more.