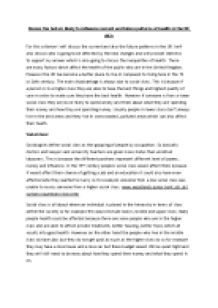 ﻿Discuss the factors likely to influence current and future patterns of health in the UK (M2) For this criterion I will discuss the current and also the future patterns in the UK.I will also discuss who is going to be affected by the new changes and will provide statistics to support my answer which is also going to discuss the inequalities of health. There are many factors which affect the health of the public who are in the United Kingdom. However the UK has become a better place to live in compared to living here in the 19 or 2oth century. The main disadvantage is always due to social class. This is because if a person is in a higher class they are able to have the best things and highest quality of care in order to make sure they have the best health. However if someone is from a lower social class they are more likely to spend wisely and think about what they are spending their money and how they are spending money. Usually people in lower class don?t always live in the best areas and they live in overcrowded, polluted areas which can also affect their heath. Social class: Sociologists define social class as the grouping of people by occupation. So basically doctors and lawyers and university teachers are given more status than unskilled labourers. ...read more.

Teachers may give special opportunities to certain groups. They may also wrongly anticipate the knowledge or potential of specific classes of children. For example, children from high-class families are sometimes viewed as being more intelligent than those from lower social classes. Sometimes more attention will be invested in the children who have more knowledge attributed to them. The idea that upper-class children are smarter has been passed down throughout the ages, but there is no conclusive evidence to back it up. In fact, lower-class children do not have lower IQ scores than upper-class children as previously suspected?. http://social.jrank.org/pages/594/Social-Class-Effects.html#ixzz1ziHKY7q1. This could have a very negative effect on the Childs health because if they feel like they are being disadvantaged this could result in them feeling lonely, and this could lead to depression and in some cases suicide. ?Official statistics reveal massive class inequalities in health, Ken Brown and Ian Bottrill, 1999, our unequal, unhealthy nation. All studies show a close link between health and social inequality. The study showed that working class people have more time off work, pay more visits to the doctor and are more likely to be chronically ill. As part of the 1999 General Household Survey, ONS statisticians looked at 1,200 workless households, containing at least one person of working age. They found that 32% of the members of workless households reported chronic illnesses, compared with 12.5% of those in working household. ...read more.

Hypertension 4. Depression 5. Cancers 6. High blood pressure 7. Stroke. Over the past 25 years the rate of all cancers has increased by 8 per cent of bowel cancer and breast cancer may be avoidable by dietary change. The Black Report which was a report that was published in 1980 suggested that social class health inequalities in overall mortality (and for most causes of death) showed that health inequalities were increasing due to reasons below. The report set out four possible mechanisms to explain the increase in the socio-economic health inequalities these were Artefact, this is when ?Population information came from the decennial census while death and cause of death information came from death certificates. An individual may have been described in different ways in the two data sources leading to numerator-denominator bias. The report also noted widening inequalities may be explained by the shrinking of social class V. With fewer people who were completely unskilled, the average health of social class V moved further from social class I. Furthermore, the report noted that the meaning of social class may have changed over time as some jobs disappear and others emerge?. http://www.healthknowledge.org.uk/public-health-textbook/medical-sociology-policy-economics/4c-equality-equity-policy/inequalities-distribution Social selection: Health determines social position. Somewhat similar to Darwin?s natural selection , i.e. healthy people are more likely to get promoted while unhealthy people are more likely to lose their jobs. Behaviour: individuals in the lower social classes indulge in comparatively more health damaging behaviour (see behavioural model above). Material circumstances: poverty causes poor health (see materialist model above). http://www.healthknowledge.org. ...read more.