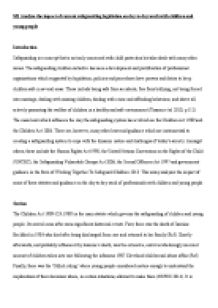 ﻿M1 Analyse the impact of current safeguarding legislation on day to day work with children and young people Introduction Safeguarding is a concept that is not only concerned with child protection but also deals with many other issues. The safeguarding children initiative has seen a development and proliferation of professional organisations which supported by legislation, policies and procedures have powers and duties to keep children safe in several areas. These include being safe from accidents, free from bullying, not being forced into marriage, dealing with missing children, dealing with crime and offending behaviour, and above all actively promoting the welfare of children in a healthy and safe environment (Tassoni et al 2010, p 112). The main laws which influence the way the safeguarding system has evolved are the Children Act 1989 and the Children Act 2004. There are, however, many other laws and guidance which are instrumental to creating a safeguarding system to cope with the dynamic nature and challenges of today?s society. Amongst others, these include the Human Rights Act 1998, the United Nations Convention on the Rights of the Child (UNCRC), the Safeguarding Vulnerable Groups Act 2006, the Sexual Offences Act 1997 and government guidance in the form of Working Together To Safeguard Children 2013. This essay analyses the impact of some of these statutes and guidance on the day to day work of professionals with children and young people. Section The Children Act 1989 (CA 1989) is the main statute which governs the safeguarding of children and young people. Its arrival came after some significant historical events. First, there was the death of Jasmine Beckford in 1984 who died after being discharged from care and returned to her family (Ref). Shortly afterwards, and probably influenced by Jasmine?s death, was the extensive, and overwhelmingly incorrect amount of children taken into care following the infamous 1987 Cleveland child sexual abuse affair (Ref). ...read more.

Trying to keep the child with his or her natural parents may often lead to a succession of short term placements and the child who eventually requires a permanent placement is more likely to be emotionally damaged and consequently harder to place. They argue that prior to the 1989 Act the system at least allowed the possibility of a decisive happy ending. The no delay and no order principles are further challenged by the concurrent system of jurisdiction inherent in the CA 1989. This is where cases can be transferred vertically and horizontally between the family proceedings court, the county court and the High Court and whilst allowing cases to be dealt with by the most appropriate court it has in practice proved to be a significant cause of delay (Brammer 2010, p178). Speight and Wynne (2000, p194) also question the credibility of working in partnership with abusive parents, another central concept of the CA 1989, and indeed the later Children Act 2004 (CA 2004). Speight and Wynne point out that you do not enter into a partnership with criminals during an investigation and the idea that you can work in partnership with people who in fact have committed a criminal act has the effect of decriminalising child abuse. Such concerns of the CA 1989 were given more credibility when the death of Victoria Climbie in 2000 received national media coverage. The resulting moral panic resulted in a lot of intellectual activity and the passing in 2004 of a new Children Act which now works alongside the Children Act 1989. The 2004 Act was born from the public inquiry into Victoria Climbie?s death and the subsequent Green Paper ?Every Child Matters?. A central tenet of the CA 2004 is the concept of working together to safeguard children and that ?effective support for children and families cannot be achieved by a single-agency acting alone.? (Brammer 2010, p182). ...read more.

For instance, corporal punishment has been banned in English state schools since 1986 and children share an equal footing today with adults as regard to human rights. The CA 1989 came at a historical juncture where compromise was needed between protecting children and, after Cleveland, also protecting family rights, and has proved to be effective in offering professionals a range of options when dealing with the safeguarding of children. The CA 1989 has even been described by the Department of Health as offering a mix and match menu where a court can choose the best course of action, or actions, for the child (Brayne and Carr 2010, p 249) and the overriding theme is that the welfare of the child is the professional?s paramount consideration (Brammer 2010, p170). When looking back to society prior to the CA 1989 this statute has to a large degree been instrumental in creating a kind of cultural revolution and existing attitudes of not listening to the child and believing the adult have been steered to one that prides itself on child centred approaches where the welfare of the child comes above anything else. Even so, other high profile deaths indicated that collaboration between professionals and the workings of the multi-agency team were not totally effective and more legislation was needed. The CA 2004 has filled this need, with much more emphasis now on training professionals to work effectively in the multi-agency team. Overall, when analysing the impact of current safeguarding legislation on day to day work with children and young people a lot of evidence suggests that the legislation and guidance has provided many benefits. However, any professional or policy maker needs to be aware of all of the issues which come under the safeguarding umbrella. For example, the way that the reporting of a particular child?s death creates a moral panic and the call for government action, and the way the government responds to these high profile cases when in fact child homicides remain pretty constant over time with on average one child killed every week in the United Kingdom (Sudisafe, 2014). ...read more.