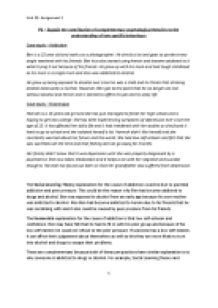 ﻿Unit 29: Assignment 2 P2 ? Explain the contribution of complementary psychological theories to the understanding of two specific behaviours Case study ? Addiction Ben is a 22 year old and works as a photographer. He drinks a lot and goes to parties every single weekend with his friends. Ben has also started using heroin and became addicted to it while trying it out because of his friends. He grew up with his mum and had tough childhood as his mum is a single mum and also was addicted to alcohol. He grew up being exposed to alcohol ever since he was a child and he thinks that drinking alcohol excessively is normal. However, Ben got to the point that he no longer can live without alcohol and heroin and it started to affect his job and his daily life. Case study ? Depression Hannah is a 16 years old girl and she has just managed to finish her high school and is hoping to get into college. She has been experiencing symptoms of depression ever since the age of 13. It has affected her daily life and it had interfered with her studies as she found it hard to go to school and she isolated herself a lot. Hannah didn?t like herself and she constantly worried about her future and the world. She had low self-esteem and felt that she was worthless all the time and that feeling did not go away for months. Her family didn?t know that it was depression until she was properly diagnosed by a psychiatrist. She now takes medication and it helps a lot with her negative and suicidal thoughts. Hannah has found out later on that her grandfather also suffered from depression. The Social Learning Theory explanation for the cause of addiction could be due to parental addiction and peer pressure. This could be the reason why Ben has become addicted to drugs and alcohol. ...read more.

This can help the therapist to understand and identify any repressed feelings and trauma that the person have experienced in the past which may have triggered the depression. Humanistic The Humanistic approach for the treatment for depression is that Counselling is a useful way of treating someone with depression. This is because with counselling it helps the person to talk about anything that is bothering them or any worries that they have. The type of topics counselling probably address are anger, relationship issues, bereavement, redundancy, infertility or the onset of serious illness. For someone that is suffering from depression, talking is very important because if they bottle up their feelings and do not share their thoughts and feelings to someone, it can have a negative effect on their mental health. Therefore talking therapy such as counselling is a recommended form or treatment for someone with depression. Unconditional positive regard is important when counselling to someone who is suffering from depression, this is because active listening and not being judged by someone helps the person to open up to someone and express their thoughts freely without the fear of being judged. Cognitive The Cognitive approach for the treatment for depression is Cognitive behavioural therapy also known as CBT. CBT is a therapy which is often used to help individuals to challenge their negative thoughts and change them to positive thoughts. The main aims of CBT are to help individuals to change the way they think and behave. The way CBT works is that it helps individual with overwhelming problems to break it down into smaller parts. For example the main 5 areas are: situations, thoughts, emotions, physical feelings and actions. The reason why CBT is recommended for people who are suffering from depression is that it helps them to challenge their negative thoughts and help them to break the vicious circle of depression. Biological The Biological approach for treatment for depression is medication for example anti-depressant. ...read more.

She may have also have felt that she was not good enough and her parents did not care about her. These negative feelings about herself could have led to her depression. The explanation of Behaviourism perspective for the cause of addiction for Ben could be due to the feeling of pleasure that he experienced due to the Dopamine. Feeling of ?high? is reinforcing because of the feeling of pleasure from it. Ben may have experienced of ?high? from the use of alcohol and drugs that he was taking. He may have become addicted to alcohol and drugs due to the feeling of pleasure that he felt from using these and ended up becoming addicted to it. Personally I do agree with the explanations given by all the perspectives of the cause of depression and addiction. This is because they give reasonable explanations for the cause of the behaviour of depression and addiction. Both these behaviours have similarities and differences and there are useful treatments for the both of these behaviours that links with each perspectives. There could be other reasons and explanation for the cause of behaviours such as depression and addiction. For example, the causes of depression could be due to worries such as unemployment, bereavement, financial difficulties, relationship breakdown, seasonal affective disorder, smoking, thyroid disease, sleep deprivation and postnatal depression after giving birth. (Murray, ND) Other reasons for the causes of addiction to drugs could be due to mental health disorders such as ADHD, post-traumatic stress disorders; you could be more likely to be dependent on drugs. The other reasons as to why Ben become addicted to drugs and alcohol could be due to lack of bond with his mother and lack of supervisions and this could have increased his chances of being addicted to drugs and alcohol. (Mayo Clinic, 2014) From this list of causes of depression we can see that there are lots of different causes to depression and addiction apart from the explanations given by the different perspectives. ...read more.