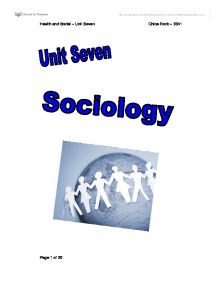 P1 - Principle sociological perspectives Many different sociologists have looked at different sociological perspectives in the effort to understand society and human behaviour. Sociology also includes different aspects of health and illness and the impact of it on society, to understand sociology all social structures and the process of socialization must be looked into. Functionalism The functionalist view on society can be tracked all the way back to Auguste Comte (1798-1857) and was very popular until around the 1970's when new ideas came to light, it was then developed in the 20th century by Talcott Parsons. Functionalists believe in sociological tradition and that the individual is merely a product of society who will help to keep society controlled and balanced. They believe that social institutions are in place to fulfill individual's biological needs, and certain functions:- * Hospitals - medical attention * Schools - knowledge * Police - Law and order It is said that these institutions influence every individual through their own experiences, and that these individuals will use their experiences within the society to benefit the whole of the society. Although the individual is seen as not being able to change society or control any particular aspects of their life as it is decided for the benefit of society. Functionalists have described society as a biological organism, all parts function together to make the whole thing work for example: the body, all organs need to function correctly to assure that the body can work properly. So society need police, schools, hospitals to function correctly but each place functions by themselves. Functionalists are very supportive of family values and traditions and that everyone should be living by the same rules, a nuclear family would be the expectation, a mother, father and two children. Marxism Marxism was discovered by Karl Marx (1818-1883) who believed that the individual was powerless and that sociology was just analyzing and explaining conflict, although Marxism did not come into existence until after Marx's death who tried to condense his views into a world view. ...read more.

Disability - Tom Shakespeare see's disability as "A problem which arises when a society does not take into account the needs of people with impairments". Disability is seen as a restriction meaning that someone can not take part in the normal life with everyone in the community. People have often referred to some places as a 'disabling environment' meaning that they do not have proper facilities in place to assist people with impairments. For example: within a community someone with a hearing impairment has not been provided with a hearing aid or been taught how to lip read so they are not being helped. Iatrogenesis Latrogenesis is in conjunction with and generate by already existing medical activity and practices. The term was brought about by 'Ivan Illich (1976)' he decided to bring his attack in this way on the industrialised society. Although this was quite a long time ago, it is still very involved within modern day debates. The main things that are regularly talked about are the spread of infections within hospitals, the side-effects of drugs and the risks of trialing new drugs. Illich identified three particular areas that he believed there was trouble with: * Clinical iatrogenesis - This is the unwanted side effects of any kind of medical intervention * Social iatrogenesis - this involves the fact that people within the society have become too reliant on drugs prescribed from the doctors, and Illich believes that we are becoming 'mass consumers of medical products' * Cultural iatrogenesis - This is when a society becomes over-concerned about 'perfect health' which makes it very difficult for anyone to have a positive attitude towards their health and also makes it even harder for people to cope with death. The clinical iceberg This is a term which is sometimes used to refer to the clinical levels of illness because it is said that these statistics can not always be completely true as not all people that are ill will visit their doctor, for various different reason. ...read more.

However in reality it has to be taken into account their working wage is bad and the environment that they might live in would then also not be great. Cultural or behavioral explanations The explanation suggests that it is the behavior and lifestyle of people who are in the lower social classes, evidence has shown that people in lower classes smoke more, drink more and partake in less exercise. The way that they chose to live their lives lead to various illnesses including heart disease, bronchitis and diabetes. Although some individuals in the lower classes find smoking and alcohol helps them to escape and cope with their very stressful lives. "It is their difficult circumstances that lead to their lifestyle choices". Different cultures obviously have various different lifestyle choices that they live through their culture, for example Asians and Muslims cover their bodies as a sign on respect but this also means that they are very sheltered from any kind of sunlight which could be a main reason for their poor health. Also the ethnic diets that individuals have may not be very good for them, for example it might not contain much fresh fruit and vegetables. Material or structural explanations This explanation focuses on inequalities in wealth and income for the lower social classes and the impact that has on levels of health. It is the poor housing and environments and the lack of job security that are associated with deprivation which brings about differences in health and well-being of various individuals. In relation to my graph in P5 this theory would look at barriers of individuals, when people who do not speak the first language of the country that they are living in they will find it particularly hard to succeed within both school and the work place. Not so much now but there would have also been situations where some ethnic minorities may have missed out on job opportunities and promotions because of their colour. ?? ?? ?? ?? Health and Social - Unit Seven Chloe Rock - 3341 Page 1 of 20 ...read more.