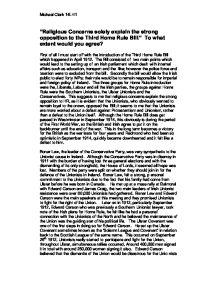 Religious Concerns solely explain the strong opposition to the Third Home Rule Bill. To what extent would you agree?

"Religious Concerns solely explain the strong opposition to the Third Home Rule Bill." To what extent would you agree? First of all I must start off with the introduction of the Third Home Rule Bill which happened in April 1912. The Bill consisted of two main points which would lead to the setting up of an Irish parliament which dealt with internal affairs such as education, transport and the like; however the police force and taxation were to excluded from the bill. Secondly the bill would allow the Irish public to elect forty MPs; their role would be to remain responsible for imperial and foreign policy of Ireland. The three groups for Home Rule introduction were the, Liberals, Labour and all the Irish parties, the groups against Home Rule were the Southern Unionists, the Ulster Unionists and the Conservatives. ...read more.

Although the Conservative Party was in disarray in 1911 with the burden of having lost three general elections and with the dismantling of its only stronghold, the House of Lords, it seemed all hope was lost. Members of the party were split on whether they should join in for the defence of the Unionists in Ireland. Bonar Law, felt a strong, personal commitment to the Unionists due to the fact that his family had come from Ulster before he was born in Canada. He met up at a mass rally at Balmoral with Edward Carson and James Craig, the two main leaders of Irish Unionist resistance were over 80,000 Unionists had gathered. Bonar Law and Edward Carson were the main speakers at this meeting and they promised Unionists to fight for the right of the Union. Later on in 1912, particularly September 1912, Edward Carson who was previously a Southern Unionist lawyer, took note of the Irish ...read more.

Moreover, the Unionists were concerned about the lack of safeguards provided to them within the Home Rule Bill. Bonar Law told the 80,000 at this rally that, 'He could not imagine no length of resistance to which Ulster can go in which I would not be prepared to support them.' This suggests to me again the religious concerns explain the strong opposition to HR particularly in the North. Once again, the Unionists do not want to lose another round with the Irish in the battle for Home Rule, however, on this occasion it seems that Carson wants to fight for a cause more than religion. He seems to want to fight to protect the industries, particularly the ship building industry, the Union itself and the Protestant and Unionist people. With the introduction of the Conservatives now coming into the fold, it also seems more of a political aspect with a hint of religious concern. ?? ?? ?? ?? Michael Clark 14LH1 ...read more.