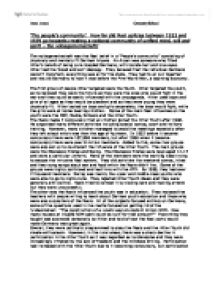 The people(TM)s community(TM). How far did Nazi policies between 1933 and 1939 go towards creating a national community of unified mind, will and spirit &quot; the volksgemeinschaft?

'The people's community'. How far did Nazi policies between 1933 and 1939 go towards creating a national community of unified mind, will and spirit - the volksgemeinschaft? The volksgemeinschaft was the Nazi belief in a "People's community" consisting of physically and mentally fit German Aryans. An Aryan was someone who fitted Hitler's beliefs of being pure blooded Germans, with blonde hair and blue eyes. Hitler had the 'blood and soil' ideology. They believed that the individual Germans weren't important, everything was all for the state. They had to all pull together and rebuild Germany to how it was before the First World War, a booming economy. The first group of people Hitler targeted were the Youth. Hitler targeted the youth, as he believed they were the future as they were the ones who would fight in the war and they could be easily influenced with the propaganda. Hitler used boys and girls of all ages as they would be obedient and as they were young they were physically fit. Hitler looked on boys and girls separately, the boys would fight, while the girls were at home bearing children. Some of the main Nazi influences on the youth were the NSF, Media, Schools and the Hitler Youth. The Nazis made it compulsory that all children joined the Hitler Youth after 1936. He organised many different activities including special camps, sport and military training. However, many children managed to avoid the meetings especially after they left school which was then the age of fourteen. In 1932 before it became compulsory there were 107,956 members, but after 1936 when it became compulsory there were over 6 million members. ...read more.

The last group that Hitler discriminated against were the Jews. The Nuremberg Laws of 1935 made it illegal for Jews and non-Jews to marry. There was hostility against the Jews because the Nazis believed it was their responsibility for the killing of Christ. The Nazis were one of several parties who encouraged Anti-Semitism. In 1938 the Pogroms of Kristallnacht occurred. This is where there was symbolised radicalisation of the regime, the Nazis were free to pursue their aim of driving the Jews out of the German life. Throughout 1939, emigration was used to remove the Jewish presence from Germany. Overall, around 40,000 people were prevented from having children and they were also made anyone who fitted into the asocials group weren't eligible for welfare benefits. Hitler wished to get ride of these groups as they didn't fit into the Volksgemeinschaft, as they weren't 'pure' like Hitler wished his society to be. Hitler was successful in destroying many of the sectors, but he wasn't able to fulfil his dream of a unified nation. Hitler then had to do something with the church. The church is maybe the only group who could undermine the Nazi party, as many people believe in what the churches say, so if Hitler was to completely undermine the church, then the church could tell their entire congregation not to believe anything that Hitler says and they would believe them. They didn't want anybody to contradict their view of a Volksgemeinschaft and its ideals. The church had its own views and opinions which many people listened to, and based their life on. ...read more.

Some women were influenced by the Nazis but due to the economic recovery, many women went back to work. Hitler was successful with his policy of getting rid of 'undesirables' as millions were killed without much rebellion. When it came to the Churches the Nazis didn't succeed as the Churches still had a lot of influence over the Nazi party. Hitler's economic aims were achieved as he was able to build up Germany, but maybe it was too soon to go to war as they were economically ready for that. Hitler also tried to encourage people to give donations. He felt that giving to charity would help to achieve the unified nation through learning to give. One way he did this was send members of the Hitler Youth round people collecting donations. Hitler's society did bring a change to German society but all the people who had been excluded from Hitler's dreams were either forced to emigrate or were brutally murdered. Some other ways in which the Nazis used propaganda was by having complete control over the mass media, they provided political plays but many people found it a great turn-off and not many people visited the theatre. Many people didn't want actually be part of any of the Nazi movements as they didn't always believe in what was being said, but they were pressured into joining. So all in all, Hitler was maybe close to achieving the Volksgemeinschaft but he maybe needed more time and effort to fully achieve his desired Volksgemeinschaft. Words 2,729 ?? ?? ?? ?? Anna James Oswestry School ...read more.