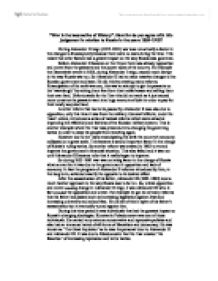 War is the locomotive of History. How far do you agree with this judgement in relation to Russia in the years 1855-1918?

"War is the locomotive of History". How far do you agree with this judgement in relation to Russia in the years 1855-1918? During Alexander II reign (1855-1881) war was not actually a factor in the changes to Russia purely because there were no wars during the time. This meant that other factors had a greater impact on the way Russia was governed. Before Alexander II became on the throne there was already opposition and unrest from the peasants and the poorer sides of the country. For example the Decembrist revolt in 1825, during Alexander I reign, caused much disrupt in the way Russia was run. So Alexander II had to make massive changes to the Russian government and laws. He did this by creating many reforms. Emancipation of the serfs was one, this was an attempt to get the peasants on his 'wavelength' by setting them free from their noble bosses and selling them their own land. Unfortunately for the Tsar this did not work as it just caused more unrest as the peasants went into huge amounts of debt in order to pay for their newly acquired land. Another reform that had to be passed by Alexander II was also due to opposition, only this time it was from the military. ...read more.

It was due to Pobedonostev that the Tsar created 'the Reaction' of increasing repression and terror tactics. Another individual who was also greatly linked with the economy factor was the Russian minister of finance, Count Sergei Witte. His aims where modernise Russia and maintain her position as a great power. Sergei had great influence over Alexander III decision making and was a big factor in the country's mass industrialization. Once again during this time period of 13 years war did not have any say in Russia's history. It was the two individuals that had the greatest influence upon the extreme 'right' ideologies of Russia's government, not to mention the assassination of Alexander III father which created much hatred within his policies. Comparing Alexander III reign to his fathers it is obvious that opposition and unrest had an opposite effect as it was due to Alexander III harsh and repressive rule that opposition became rife. Nicholas II (1894-1917) was very different to his two predesecers as when he got on to the throne he admitted that he was not prepared for the task of being Tsar. Despite this he still shared the views of his father on autocracy and tried to continue with a ruling of repression. ...read more.

At first the war initially enhanced his position as it was a sign of Russia's pride and resistance. Unfortunatly for the Tsar the war did not go to plan as despite his army's immense size it was crippled by a lack of equipment due to poor administration. This meant that his popularity soon fell and opposition such as the Socialist: Bolsheviks, SRs and the Mensheviks began to plan the 1917 revolution. So once again war became a very important factor in the way Russia was run because for a second time it had caused unrest amongst the people except this time it signaled the end to the Romanov legacy. So, on the 26th February 1917, Nicholas II agreed to abdicate on his own and stepped down from power leaving Russia a republic after 304 years of Romanov rule. During Nicholas' rule it was a mixture of all the different factors that causes the Tsar to step down but it could be said that War was the creator of the other factors. For example the opposition would have been crushed if Russia defeated Japan in 1904, and had Russia kept out of WWI then Nicholas may have reigned till his death. All this is just speculation as it was due to the Wars that the Romanov destiny sunk like the Russian navy in the Japanese war. Tom Gunhouse ...read more.