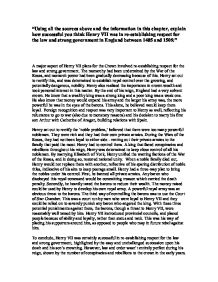 A major aspect of Henry VII plans for the Crown involved re-establishing respect for the law and strong government. The monarchy had been undermined by the War of the Roses, and monarch power

"Using all the sources above and the information in this chapter, explain how successful you think Henry VII was in re-establishing respect for the law and strong government in England between 1485 and 1509." A major aspect of Henry VII plans for the Crown involved re-establishing respect for the law and strong government. The monarchy had been undermined by the War of the Roses, and monarch power had been gradually decreasing because of this. Henry set out to rectify this, and was determined to establish royal control over the growing, and potentially dangerous, nobility. Henry also realised the importance in crown wealth and took personal interest in this matter. ...read more.

During the Wars of the Roses, they had not been loyal to either side - renting out their private armies to the family that paid the most. Henry had to control them. A king that faced conspiracies and rebellions throughout his reign, Henry was determined to keep close control of all his noblemen. By marrying Elizabeth of York, Henry unified the warring factions of the War of the Roses, and in doing so, restored national unity. When a noble family died out, Henry would not replace them with another, reflective of his sparing distribution of noble titles, indicative of his aim to keep peerage small. Henry had a three-way plan to bring the nobles under his control. ...read more.

This was his way of placing his supporters around him, as opposed to people who may in future rebel against him. To conclude, Henry VII was certainly successful in re-establishing respect for the law and strong government, highlighted by the easy and unchallenged succession upon his death and his son's crowning. However, law and order wasn't entirely perfect during his reign, shown by the number of conspiracies and rebellions to the crown in the early years. Despite this, Henry managed to control, and cut down on the number of them, the nobility well, and made good use of bonds and recognizance's, where payments were made in return for good behavior. These payments were a key reason for the peace at the time, whereas the growth of the Court of Star Chamber helped control crime. ...read more.