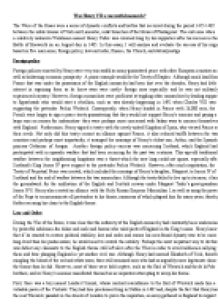 Was Henry VII a successful monarch?

﻿Was Henry VII a successful monarch? The Wars of the Roses were a series of dynastic conflicts and battles that occurred during the period 1455-1485 between the noble houses of York and Lancaster, cadet branches of the House of Plantagenet. The end came when a relatively unknown Welshman named Henry Tudor was crowned king by his supporters after his success in the Battle of Bosworth on an August day in 1485. In this essay, I will analyse and evaluate the success of his reign based on five main aims; foreign policy, law and order, finance, the Church, and status/prestige. Foreign policy Foreign policies enacted by Henry were very successful as many guaranteed peace with other European countries as well as bolstering economic prosperity. A prime example would be the Treaty of Etaples. Although much land from France that was under the possession of the English monarchy had been lost over the decades, Henry had little interest in regaining them as he knew wars were costly- foreign ones especially- and he was not militarily experienced anyway. However, foreign monarchies were proficient at toppling other monarchies by lending support to figureheads who would start a rebellion, such as was already happening in 1492 when Charles VIII was supporting the pretender Perkin Warbeck. Consequently, when Henry landed in France with 26,000 men, the French were happy to sign a peace treaty guaranteeing that they would not support Henry?s enemies and paying a large sum on money for indemnities- they were perhaps more concerned with Italian wars to concern themselves with England. ...read more.

There have always been those who believed that Edward V and Richard of York were still alive when Henry VII took the throne, and that he had them killed, to be rid of such potential rivals. Whatever the truth of it, Henry could not produce a live Duke of York to show up Warbeck's imposture. In 1497 Warbeck was captured. He might have been awarded the same mercy as Simnel (who now worked in the Royal Kitchen), had he not tried to escape from his prison in the Tower. Henry could not afford now to let him live, and he was executed in 1499. Warwick, the innocent p**n, was beheaded at the same time, for, as long as he lived, there would certainly be pretensions on his behalf. To further reduce the threat of armed rebellion against his authority, Henry VII outlawed livery, and the maintenance of private armies. The armed bands that, wearing their feudal badges, had overrun the countryside, intimidated sheriffs, and bullied juries, now had their days numbered. Putting an end to the brigandage of the nobility required numerous statutes, since the feudal lords did not readily give up the practice of private war. But, by the end of Henry's reign, the typical English nobleman had been forced into other occupations than the medieval ones of riot and civil war. He raised the crown far above the nobles, and formed an alliance with the middle class, acting through their representatives in the House of Commons, who feared the return of the days of civil war, and realized that their survival and livelihood was dependent on the king's protection. ...read more.

restored the status and power of the English throne in such a way that people would?ve perhaps respected its authority enough to prevent any more rebellions or civil wars happening again in England. By the beginning of the 16th Century, Henry?s prestige in Europe and his security at home were assured. He had survived the ambitions of pretenders to the throne ? and without traces of too much blood on his hands; he was strong in central government and generally obeyed throughout the realm; he was successful in foreign war-albeit not absolutely heroic ? in the eyes of his subjects; England was almost unprecedentedly prosperous and growing daily richer in culture, with the extension to England of the arts and scholarship of the European Renaissance. Conclusion In conclusion, Henry?s reign was mostly successful as it managed to restore stability in England after decades of political turmoil and upheavals caused by the War of the Roses. His fiscally conservative policies repaired the financial state of the English throne, his foreign policies managed to guarantee peace with other European powers as well as forge alliances with them, and due to his assertiveness and leadership he controlled the nobility to ensure national peace during his reign. However, his accomplishments cannot be exaggerated as his reign became increasingly unpopular in its later half as financially prudent policies and the incredibly high taxes and fines he levelled on the nobility caused many to be disaffected and unhappy with his over-reaching power, as well as with his unadventurous and sombre nature and his obsession with government. ...read more.