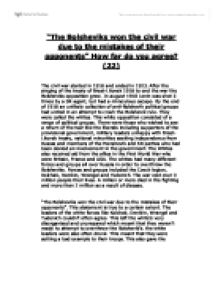 The Bolsheviks won the civil war due to the mistakes of their opponents How far do you agree?

"The Bolsheviks won the civil war due to the mistakes of their opponents" How far do you agree? (22) The civil war started in 1918 and ended in 1923. After the singing of the treaty of Brest-Litovsk 1918 to end the war the Bolsheviks opposition grew. In august 1918 Lenin was shot 3 times by a SR agent, but had a miraculous escape. By the end of 1918 an unlikely collection of anti-Bolshevik political groups had united in an attempt to crush the Bolshevik rule. They were called the whites. This white opposition consisted of a range of political groups. There were those who wished to see a return of the tsar like the liberals including supporters of the provisional government, military leaders unhappy with Brest-Litovsk treaty, national minorities seeking independence from Russia and members of the Menshevik and SR parties who had been denied an involvement in the government. The Whites also received aid from the allies in the First World War who were Britain, France and USA. ...read more.

The whites also received support from Britain, France and USA who sent troops and money to help out. This created even more disunity and tension as these countries came in with their own aims and intentions. After 1918 foreign intervention became half hearted. This left the whites significantly weaker without the much needed foreign support. The whites were in a poor geographical area. The whites were scattered around the edges of the Bolshevik area which was Moscow and Petrograd. With the whites being spread around Russia they were separated by long distances. This led to the white's lack of effective communication and transport links. This meant that the white army forces had to largely fight independently of one another. This gave the Bolshevik's an advantage as the whites couldn't get the supplies that they needed like food and weapons which left them weak in places. This also meant that the whites found it hard to communicate with each other about co-ordinating the attacks of different white armies. ...read more.