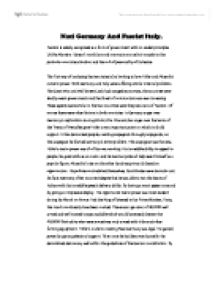 A report on the development of common law and equity.

Nazi Germany And Fascist Italy. Fascism is widely recognised as a form of government with no realest principles. Unlike Marxism I doesn't mould around one main source but morphs to the particular countries situation and the cult of personality of its leader. The First way of analysing the two states is by looking at how Hitler and Mussolini came to power. Both Germany and Italy were suffering similar internal problems. The Great War and Wall Street Crash had ravaged economies, the countries were lead by weak governments and the threat of communism was ever increasing. These aspects were similar in the two countries were the precursors of Fascism. Of course there were other factors in both countries. In Germany anger over Germany's capitulation during World War One and her anger over the terms of the Treaty of Versailles gave Hitler a very important point on which to build support. ...read more.

Hitler's route to creating Nazi Germany was legal. He gained power by gaining electoral support. Then once he had become chancellor he demolished democracy well within the guidelines of the German constitution. By using the Enabling act he could dissolve all other political powers and place himself as the F�hrer. Of course the methods employed by Hitler to gain voters and be able to pass the Enabling act were not strictly legal. Mussolini on the other hand forced his way into power by marching on Rome. Nothing about his seizure of power was legal. Once in Power Mussolini like Hitler began to dismantle all other parties, and declared Italy a dictatorship. He created censorship laws and press laws which stated that all journalists must be registered fascists so as to be able to write. With this and his brilliant use of propaganda Mussolini didn't have any trouble from opposing groups. ...read more.

Mussolini wanted to unite the people of Italy: "We have Italy, now we must make Italians" The primary differences between the two states was in racism. Hitler was of the conviction that anybody non-Aryan was an enemy of the State and should be removed from the gene pool, either by sterilisation or by mass murder. Mussolini on the other hand was not an anti-Semite many of his leading fascists were Jews. Whereas Hitler wanted the creation of a Master Race, Mussolini wanted to return Italy to the glory days of the Roman Empire. Italian Fascism and German Nazism are two different chameleons in the same habitat. On the surface they make look the same but if you scratch around a bit under the skin you find that the core is very different. From the outside they seem to be similar in there aggressive external policies, secret police forces and anti communism. But!, on both systems were different in that they were made to suit the internal problems in the countries prior to the dictatorship. ...read more.