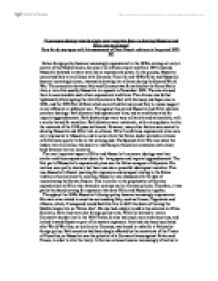 &quot;A common ideology was the single most important factor in drawing Mussolini and Hitler into an alliance&quot;

"A common ideology was the single most important factor in drawing Mussolini and Hitler into an alliance" How far do you agree with this assessment of n**i-Fascist relations in the period 1933-39? Italian foreign policy became increasingly expansionist in the 1930s, aiming not only at control of the Mediterranean, but also at an African empire and from 1935 onwards Mussolini behaved in every way like an expansionist power. In the process, Mussolini committed Italy to an alliance with Germany. From the mid-1930s Hitler and Mussolini became increasingly closer, eventually drawing into alliance during the Second World War. The connection between Italy and Germany was formalized by the Rome-Berlin Axis; a term first used by Mussolini in a speech in November 1936. The axis allowed them to accommodate each others expansionist ambitions. The alliance was further tightened by Italy signing the Anti-Commintern Pact with Germany and Japan also in 1936, and the 1939 Pact of Steel which committed Germany and Italy to mutual support in any offensive or defensive war. Throughout this period Mussolini and Hitler shared a common ideology. Both dictators had expansionist aims, and an ambitious wish for imperial aggrandisement. Both dictatorships were very militaristic and nationalistic, with a similar hatred for socialism. ...read more.

A German alliance became increasingly attractive to Mussolini as Hitler boldly dismantled the settlement piece by piece. Therefore it is arguable that their expansionist and revisionist ideology brought Mussolini and Hitler together. Mussolini and Hitler's joint yearning for worldwide fascism also brought the leaders together; as they both believed that Europe's future lay with Fascism, nationalism and right-wing militarism. Mussolini hoped to synchronize his own ideology with Hitler's Nazism in order to produce a 'century of Fascism'. The involvement in the Spanish Civil War was motivated partly by this ideology; both leaders shared an obsessive hatred of socialism, and Mussolini argued that he could not allow a Communist government to be formed in the Mediterranean. By helping Franco overrule the socialists in Spain; Hitler knew that it would mean the Soviet Union would loose Spain as a potential ally, and that the international political climate would be dominated by fascism. The outbreak of the Spanish Civil War further accelerated Italo-German rapprochement and Hitler not only saw the civil war as a means of testing his newly rearmed military and air force, but as a way to get closer to Italy. The outcome of the Spanish Civil War led to a major change in international relations: France and Britain drew closer together, and an alliance between these democracies and Italy was now made impossible. ...read more.

France's political system was forever changing, and the country saw a change of government four times in 1933. Another important point to consider relating to the democracies was that they were very against Italian expansionism. Britain and France had numerous colonies in Africa, but denied Mussolini Abyssinia. This consequently drew Germany and Italy closer together. Throughout this time period, Mussolini wavered between an alliance with Britain and France, and an alliance with Germany. He played the democracies off each other, in order to benefit his expansionist aims. It should not be disputed that Mussolini and Hitler's common ideology was a highly important part of the alliance between Italy and Germany. I would agree with the statement that it was the Fascist ideology that drew the two nations together into eventual alliance, as both leaders held many similar ideologues, such as expansionism, imperial aggrandisement and a hatred for socialism. However there were other extremely important factors that must be considered such as the military and political advantages for both countries, and the personal relationship between the two leaders. A shared ideology was singly very important, but alone it could not have drawn the countries together. No countries draw together based purely on common ideology, there must always be economic, military or foreign policy benefits. ...read more.