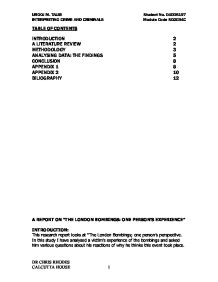 A REPORT ON &quot;The London Bombings: One Person's Experience&quot;

TABLE OF CONTENTS INTRODUCTION 2 A LITERATURE REVIEW 2 METHODOLOGY 3 ANALYSING DATA: THE FINDINGS 5 CONCLUSION 8 APPENDIX 1 8 APPENDIX 2 10 BILIOGRAPHY 12 A REPORT ON "THE LONDON BOMBINGS: ONE PERSON'S EXPERIENCE" INTRODUCTION: This research report looks at "The London Bombings; one person's perspective. In this study I have analysed a victim's experience of the bombings and asked him various questions about his reactions of why he thinks this event took place. My research problem was raised from the broader topic of terrorism. I decided to narrow it down to a specific area that I could concentrate on and this area was in fact the London Bombings. I thought to carry out this study because it would be interesting and different to the research already done on terrorism. My report also includes other key realities that have been approached for example September 11th attacks and the Iraq war. A LITERATURE REVIEW: Terrorism may be well considered one of the most controversial topics today. One can ask twenty different people their feelings on terrorism and what they believed it to be; a person may get twenty different answers. The nature and history of terrorism as we know it today is that terrorist's like to provoke the public who has the authorities that gives them the upper hand scenario. The war on terror began as soon as the U.S Government declared that the planes which crashed into the Twin Towers were an act of terrorism. There was much panic and vivid theories that aroused the public's attention directly to Terrorism, Al-Qaeda and Muslims'. Ever since 9\11 a lot of work was published on Al-Qaeda and what they want. ...read more.

Who is responsible for the attacks? Another fact that I discovered was that the attacks may have been planned by the government itself. This was a real shock to me and I was speechless just to hear him talk about it. "It is almost fact that the twin towers were brought down by a government conspiracy, so who is to say that the same is not going on with the British government." "He implied that the war on Iran was getting ridiculous, the American government is planning on nuking Iran for a very ironic purpose. They say Iran is a threat to world peace through developing nuclear weapons. "The only threat to world peace at the moment is the USA and their 'whole in the head' ideology. Who cares if Iran develops nukes, it will just bring them up to power with the hypocritical western countries." He went on to explain how ID cards were introduced after the bombings and assumed that it created fear mongering to the extent of brainwashing the public into believing we need some sort of control on freedom of speech and a system in place that will eventually control all of our lives. Invasion of Iraq and the fight for oil: In this discussion he talked about how 9\11 gave George Walker Bush a very good reason to attack the country he felt threatened by, because of oil. He says "Bush thinks he knows what is right, and wrong for us, just like Bin Laden reckoned, he was doing Muslim's a favour through his action of 9/11, but why do people think 9/11 happened in the first place?" ...read more.

� Quantitative research also has "the disadvantage that the resulting theory often fails to take account of the unique characteristics of individual cases" (Edwards, 1998) � Though occurring in both qualitative and quantitative, a possible disadvantage is researcher bias. "Researcher bias tends to result from selective observation and selective recording of information, and also from allowing one's personal views and perspectives to affect how data are interpreted and how the research is conducted" (Johnson, 1997). APPENNDIX 2 With the qualitative method of document analysis there are concerns about the numerical and arithmetical accuracy. One must not try to window dress or manipulate and thus distort the evidence as well as omitting any essential inconvenient evidence. "However issues are more difficult with the qualitative approach as there is more subjective evidence to work with. Giving opinions and appropriate importance to statements becomes a central issue. There should be no attempt to deliberately misinterpret or fabricate evidence when conducting document analysis .Sub-conscious bias on the part of the researcher may be overcome by triangulation, but in the final analysis an argument based on a judgement is required."4 At the beginning of my study I was paralysed as to what to choose for my report. I thought of doing terrorism but that was such a broad topic that I had to cut it down into bite-size topic; I chose London bombings. After that I had real difficulty actually getting hold of a victim of the blasts. When I did finally manage to find someone setting the time and interview was fairly easy. When the interview was complete I had difficulty writing it up. I had to delete certain bits that were irrelevant. The writing up process was very difficult as I had to listen to the interview on the tape and type it up. ...read more.