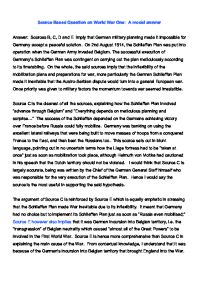 Source Based Question on World War One: A model answer.

Source Based Question on World War One: A model answer Answer: Sources B, C, D and E imply that German military planning made it impossible for Germany accept a peaceful solution. On 2nd August 1914, the Schlieffen Plan was put into operation when the German Army invaded Belgium. The successful execution of Germany's Schlieffen Plan was contingent on carrying out the plan meticulously according to its timetabling. On the whole, the said sources imply that the inflexibility of the mobilization plans and preparations for war, more particularly the German Schlieffen Plan made it inevitable that the Austro-Serbian dispute would turn into a general European war. Once priority was given to military factors the momentum towards war seemed irresistible. Source C is the clearest of all the sources, explaining how the Schlieffen Plan involved "advance through Belgium" and "Everything depends on meticulous planning and surprise..." The success of the Schlieffen depended on the Germans achieving victory over France before Russia could fully mobilize. Germany was banking on using the excellent lateral railways that were being built to move masses of troops from a conquered France to the East, and then beat the Russians too. This source sets out in blunt language, pointing out in no uncertain terms how the Liege fortress had to be "taken at once" just as soon as mobilization took place, although Helmuth von Moltke had cautioned in his speech that the Dutch territory should not be violated. ...read more.

Apart from blaming the war on "military plans" Churchill hinted that the ignorance of contingencies of military planning on the part of the sovereigns contributed to the War. I would say that this source is accurate and believable based on the fact that it corroborated with my readings. Moreover, Churchill was an expertise in military strategies and theories and the source was written with the privilege of hindsight in 1931. Source B is the least useful of the sources that "support" the hypothesis. It explains how King Leopold of Belgium was unable to affirm if he "...would take her stand on..." the side of the Germans, i.e., to allow the Germans safe passage through Belgium. It did not state in as bold a manner that the neutrality of Belgian would be compromised, except that Germany could not "guarantee" that Belgian territory would be safe from German attack. Whether King Leopold knew what this meant exactly is not clear in the source, but contextual knowledge points out clearly that the fortification of the Liege was meant specifically for that purpose. So looking at Source D again, I would think that Churchill may not be right in painting the monarchs of Europe as rather ignorant sovereigns. Source B appears to take Germany to task for demanding that Leopold should "should give him (the Kaiser) ...read more.

However the crucial consideration of military momentum as a result of advance planning and a desire not to lose the race of mobilization made the war inevitable. While the Germans had their Schlieffen Plan, the Germans had their Plan XVII, hence the hypothesis might be better phrased as "Military planning of all countries, principally that of Germany's Schleiffen Plan, made it impossible for a peaceful solution to the diplomatic crisis of July 1914." Obviously, the set of given sources could then include reference to France's Plan XVII. Comments: The parts in blue have been included/edited Notes on Plan XVII Technically, Plan XVII called for an advance by four French Armies into Alsace-Lorraine on either side of the Metz-Thionville fortresses, occupied by the Germans since 1871. The southern wing of the invasion forces would first capture Alsace and Lorraine (in that order), whilst the northern wing would - depending upon German movements - advance into Germany via the southern Ardennes forests, or else move north-east into Luxembourg and Belgium. The architects of Plan XVII, which included Joseph Joffre, took little account of a possible German invasion of France through Belgium until just before war was declared; and in modifying the plan to deploy troops to meet such an eventuality, actual French activity to meet an invasion via Belgium was lacklustre at best in August 1914. ...read more.