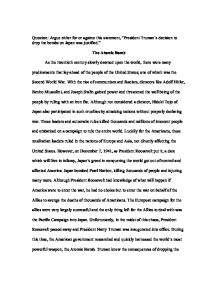 Argue either for or against this statement, &quot;President Truman's decision to drop the bombs on Japan was justified.&quot;

Question: Argue either for or against this statement, "President Truman's decision to drop the bombs on Japan was justified." The Atomic Bomb As the twentieth century slowly dawned upon the world, there were many predicaments that lay ahead of the people of the United States; one of which was the Second World War. With the rise of communism and fascism, dictators like Adolf Hitler, Benito Mussolini, and Joseph Stalin gained power and threatened the well being of the people by ruling with an iron fist. Although not considered a dictator, Hideki Tojo of Japan also participated in such cruelties by attacking nations without properly declaring war. These leaders and autocratic rules killed thousands and millions of innocent people and embarked on a campaign to rule the entire world. Luckily for the Americans, these totalitarian leaders ruled in the nations of Europe and Asia, not directly affecting the United States. However, on December 7, 1941, as President Roosevelt put it, a date which will live in infamy, Japan's greed in conquering the world got out of control and affected America. ...read more.

The Japanese began to draft its entire population, including children and women. If the Americans were to have come face to face in combat with these soldiers, America would have suffered great losses; losses that would be impossible to fully recover from. Furthermore, sending troops into Japan and dropping a bomb on Japan is essentially almost the same concept; both are to decimate Japan into rubbles in order for the nation to surrender. So, why not choose the option of dropping bombs in Japan when it is much safer and more efficient than sending troops into Japan? With the attack of Pearl Harbor, Japan and the United States were officially in a state of war between each other. In a state of war, the main focus is to decimate the enemy by any means possible. This meaning, deploying troops into enemy territories creating blockades, and even dropping bombs on the enemy is perfectly legal. President Truman was entirely justified in deciding to drop the Atomic Bombs on Japan. In any war, opposing nations killed enemy troops, decimated enemy cities into rubbles, and dropped bombs. ...read more.

The point of war is to win and the only way to do so is to decimate the opposing side by any means possible. Deploying troops, creating blockades, and dropping bombs are all one and the same; they all result in death. The reason in deploying troops is to kill enemy troops. The reason in creating a blockade is to block shipment into enemy nations; thus, causing a dearth in goods and food, causing starvation and eventual death. The reason in dropping bombs is to decimate cities into rubbles and demonstrate power. Thus, if all these result in death, why is it so controversial for President Truman to make a decision in bombing Japan? A bomb is a bomb; whether it is an A, B, or C bomb, they are all one and the same. Bombs were made to decimate cities and kill people. In war, saving lives and winning are the top priorities in war. President Truman decided to bomb Japan in order to save lives and to win the war; thus, President Truman was totally justified in making the decision in dropping the bombs. By: John Chun ...read more.