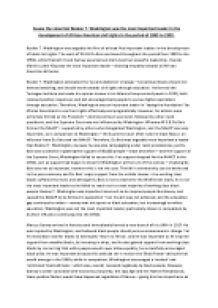 Assess the view that Booker T. Washington was the most important leader in the development of African American civil rights in the period of 1865 to 1992.

﻿Assess the view that Booker T. Washington was the most important leader in the development of African American civil rights in the period of 1865 to 1992. Booker T. Washington was arguably the first of at least five important leaders in the development of black civil rights. The work of W.E.B Du Bois continued throughout the period from 1909 to the 1950s, while Malcolm X and Garvey experienced short-lived but powerful leadership. Overall, Martin Luther King was the most important leader ? showing empathy towards all African American attitudes. Booker T. Washington advocated the ?Accomodationist? strategy ? he believed blacks should not demand anything, and should work towards civil rights through education. He formed the Tuskegee Institute and made his opinion known in his Atlanta Compromise Speech in 1895; both received positive responses, and did encourage black people to pursue higher aspirations through education. Therefore, Washington was an important leader in ?laying the foundation? for African Americans to use their rights effectively and pragmatically. However, his actions were extremely limited as the President ? Andrew Johnson was racist, followed by other racist presidents, and the Supreme Court was not influenced by Washington. ...read more.

He was important because this attitude set in motion the ?Black Power? attitude that would emerge in the 1960s, while in comparison, Washington encouraged a ?modest? and ?victimised? black attitude ? which was, overall, received negatively by black people. However, Garvey?s career coincided with economic prosperity, the Jazz Age and the Harlem Renaissance; these positive factors would have happened regardless of Garvey ? giving him less importance as a leader of African Americans towards civil rights. The fact that Washington had the Jim Crow laws and extremely racist Supreme Court officials to contend with, compared with Garvey?s ?lucky? timing of the economy and weakened Supreme Court ? by Du Bois ? this can show that Washington was more important than Garvey. Washington may not have achieved much, compared to other leaders, but he was at the very start of the period ? challenging America when racism was still deeply engrained. Whereas Garvey also did not achieve much, but he came at a time when attitudes had already begun to change ? Garvey was not as important as Washington. Malcolm X continued Garvey?s view of white racism never changing, but his attitude was more radical than Garvey?s and perhaps not as important as Washington, as Malcolm X had advantages during his career; while Washington?s only advantage was his education. ...read more.

encouraged education and less resentment towards the white man ? in that sense, the social sense, Washington was not the most important leader, Martin Luther King was. Even in the political sense, King was the most important leader and Washington was clearly not as important as even Du Bois and the NAACP. For example, King was so successful with Governmental support, that by 1961 810 Southern towns had desegregated facilities. Whereas Washington merely lunched with Teddy Roosevelt and attended events with White political figures while the Supreme Court remained racist. To conclude, although Martin Luther King had a number of benefits: the most supportive president, the wonders of the media, growing white sympathy and a golden opportunity with the 100th Anniversary of the Emancipation Proclamation ? King was clearly the most important leader. Garvey and Malcolm X had too strong a view, and did not take action to help African Americans for a sustained period of time, Du Bois was perhaps the second most important ? as the NAACP showed a gradual success in the courts; encompassing social and political change. Booker T. Washington was important as he set civil rights activism in motion, but he did not take on a role as important as Martin Luther King. ...read more.