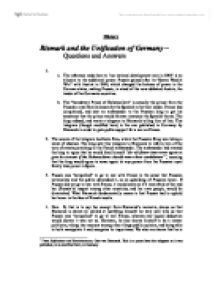 Bismark and the Unification of Germany-

History Bismark and the Unification of Germany - Questions and Answers 1. a. The reference made here to 'our national development won in 1866' is an allusion to the additional power Prussia gained after its "Seven Week's War" with Austria in 1866, which changed the balance of power in the German states, making Prussia, in stead of the now-defeated Austria, the leader of the Germanic countries. b. The "heredetary Prince of Hohenzollern" is actually the prince from the Prussian royal family chosen by the Spanish to be their leader. France had complained, and sent an ambassador to the Prussian king to get his assurance that the prince would forever renounce the Spanish throne. The king refused, and wrote a telegram to Bismarck telling him of this. This telegram (though modified here) is the one published in Germany by Bismarck in order to gain public support for a war on France. ...read more.

B, that is to say the excerpt from Bismarck's memoirs, shows us that Bismarck is above all skilled at justifying himself: he very well tells us that Prussia was "compelled" to go to war France, whereas any logical deduction would dictate it was not so. However, he also shows himself to be a master politician, taking into account among other things public opinion, and being able to both manipulate it and recognize its importance. We also are shown that he is not at all shy about using deception and propaganda to achieve his aims: it was the omissions from the Ems telegram, when it was sent to be published, which made a public furor and gave Bismarck, and Napoleon III, the public backing for war. Of his aims, more is clear: it is apparent, especially if one knows the context in which this event takes place, that Bismarck wants to expand Prussian control and power, by reducing those of others. ...read more.

However, this 'compression' thereby allows a very large amount of information to be presented in a format comprehensible by a very large body of people (drawings). The second document (B) is somewhat different: it is an excerpt from Bismarck's memoirs. The problem with this format is that Bismarck perchance was not totally forthcoming in these writings, knowing they would become public. Also, written by Bismarck, they would tend to show only one (the Prussian) side of the story. However, the memoir gives us also a rare insight into the thoughts of one of history's greatest men. Sources As a general guide for context, the following source(s) were used: * Microsoft(r) Encarta(r) Online Encyclopedia Deluxe 2001 - Article(s): "Bismarck, Prince Otto Eduard Leopold von" (c)Microsoft Corp. 1997-2000 (c) All rights reserved 1 From Reflections and Reminiscences, Otto von Bismarck. This is a quote from the telegram as it was published, in its modified form, in Germany. ...read more.