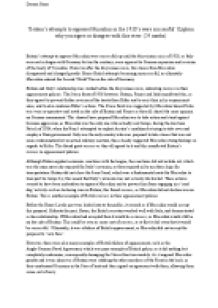 Britains attempts to appease Mussolini in the 1930s were successful Explain why you agree or disagree with this view.

﻿Daryan Omar ?Britain?s attempts to appease Mussolini in the 1930?s were successful? Explain why you agree or disagree with this view. (24 marks) Britain?s attempt to appease Mussolini were successful up until the Abyssinian crisis of 1935, as Italy were not in league with Germany but on the contrary, were opposed to German expansion and revision of the treaty of Versailles. However after the Abyssinian crisis, this stance from Mussolini disappeared and changed greatly. Hence British attempts becoming unsuccessful, as ultimately Mussolini entered the Second World War on the side of Germany. Britain and Italy?s relationship was cordial before the Abyssinian crisis, indicating success in their appeasement policies. The Stresa front of 1935 between: Britain, France and Italy manifested this, as they agreed to prevent further revision of the treaty from Hitler and to resist him in his expansionist aims, and to also condemn Hitler?s actions. The Stresa front was suggested by Mussolini himself who was very co-operative and acted on the side of Britain and France as they all shared the same opinion on German rearmament. ...read more.

This is another example of British success in their appeasement policies. Before the Hoare-Lavale pact was leaked into to the public, it seemed as if Mussolini would accept this proposal. Hitherto the pact, Hoare, the British secretary worked well with Italy, and demonstrated a close relationship. If Mussolini had accepted then it would be a success, as Mussolini would still be on the side of Britain. This could be seen as some sort of success, as at first it did seem that it would be successful. Ultimately, it was a failure of British appeasement, as Mussolini did not accept the proposal to ?save face?. However, there were also many examples of British failure of appeasement, such as the Anglo-German Naval Agreement, which was poor example of British policy, as it did nothing but completely undermine, consequently damaging the Stresa front irrevocably. As it angered Mussolini greatly and it was almost as if Britain were stabbing the other members of the Front in the back, as they condemned Germany in the Stresa Front and then signed an agreement with them, allowing them some sort of navy. ...read more.

The acceptance of the Anschluss from Italy was a great success for Germany and a greater blow to the treaty and Britain. Mussolini invaded and conquered Abyssinia in the end, which was the result of Britain?s half-hearted sanctions. This also gave confidence to both Mussolini and Hitler, as it showed them how feeble and indecisive Britain during the Abyssinian crisis, giving them the impression that they could perform such acts again. In conclusion, Britain?s policies of appeasement were successful up until the Hoare-Laval pact, as from then on; British appeasement failed and became unsuccessful, because Italy ended up on Germany?s side in the Second World War. Also after the Abyssinian crisis, appeasement could be seen as an unnecessary policy, due to the fact that Mussolini was on Hitler?s side. Yet Britain pressed on with appeasement, such as the Easter Accords, which accepted the status quo of the Middle East and Abyssinia, but this is negligible as Mussolini did not actually stick to it and did not achieve anything. The successful examples were not significant overall, as the unsuccessful cases were more prevalent and outweigh them. ...read more.