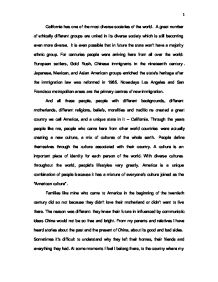 California has one of the most diverse societies of the world. A great number of ethically different groups are united in its diverse society which is still becoming even more diverse. It is even possible that in future the state won't have a majority ethnic group. For centuries people were arriving here from all over the world: European settlers, Gold Rush, Chinese immigrants in the nineteenth century. Japanese, Mexican, and Asian American groups enriched the state's heritage after the immigration law was reformed in 1965. Nowadays Los Angeles and San Francisco metropolitan areas are the primary centres of new immigration. And all these people, people with different backgrounds, different motherlands, different religions, beliefs, moralities and traditions created a great country we call America, and a unique state in it - California. Through the years people like me, people who came here from other world countries were actually creating a new culture, a mix of cultures of the whole earth. People define themselves through the culture associated with their country. A culture is an important piece of identity for each person of the world. With diverse cultures throughout the world, people's lifestyles vary greatly. America is a unique combination of people because it has a mixture of everyone's culture joined as the "American culture". ...read more.

But not only the Chinese were coming to California. Many people in California came from Mexico or other parts of Latin America, some are from Asian nations. For example, there was time when Mexican workers passed freely over the border each season to work in the Southwest of the state. Today illegal Mexican workers live in a fear being deported and don't seek social services (the only exceptions are emergency medical care and primary education). It's no coincidence that California recently passed a law requiring medical care providers and schools to deny services to illegal immigrants - those are the only two social services they use (in spite of the contributions they make to the economy), because those 2 are the only ones they're willing to risk deportation to use. Justice prevailed - a federal court declared the law unconstitutional. (Vernellia R.) Surely, it is sad and you may form a negative opinion about the state, but do not be too quick, for there is an enormous number of wonderful things, places and opportunities the state may offer to everyone. California's attraction to immigrants is nothing new. Indeed, the first settlers to join the American Indians in California came not from Western Europe or the United States but from Mexico and Russia. ...read more.

The state's economy is one of the seven largest economies in the USA and it still continues to benefit from immigration. However, the magnitude of current flows - and the disproportionate share of poorly educated immigrants - combined with ongoing changes in the state's economy have increased the costs of immigration to the state's public sector and to some native-born workers. The state faces a growing challenge as it attempts to integrate these new immigrants while also trying to promote the welfare of the state and all its residents. Surely, California had many problems connected with new people coming to the state, but this has many good sides as well. People like me, people from all over the world came here, created and shaped the state and its culture, became Americans. We all are of different origins; we used to speak different languages. Each of us has own unique and complicated story and reasons which lead us here. What is in my opinion great about this state is that here we are not Chinese or Russian, Mexican or Iris, - here we are Americans. And we should always remember that all of us are very different, but we should respect and understand it, for today we are a one united nation. ...read more.