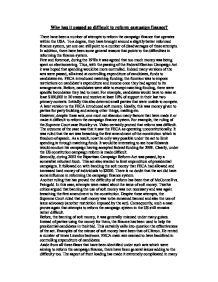 Why has it passed so difficult to reform campaign finance? There have been a number of attempts to reform the campaign finance that operates within the USA. To a degree, they have brought around a slightly better reformed finance system, yet one can still point to a number of disadvantages of these attempts. In addition, there have been some general reasons that points to the difficulties in reforming the finance system. First and foremost, during the 1970s it was agreed that too much money was being spent on electioneering. Thus, with the passing of the Federal Election Campaign Act it was hoped that spending would be more controlled. Indeed many versions of the acts were passed, all aimed at controlling expenditure of candidates, funds to candidates etc. FECA introduced matching funding; the function was to impose restrictions on candidate's expenditure and income once they had agreed to its arrangements. Before, candidates were able to except matching funding, there were specific boundaries they had to meet. For example, candidates would have to raise at least $100,000 in 20 states and receive at least 10% of support in their last two primary contests. ...read more.

This act also wanted to limit expenditure of presidential campaigns. It followed on with banding the soft money that FECA had allowed and increased hard money of individuals to $2000. There is no doubt that the act did have some influence in reforming the campaign finance system. Another ruling that has proved the difficulty of reform has been that of McConnell vs. Feingold. In this case, attempts were raised about the issue of soft money. Twelve critics argued that banning the use of soft money was not necessary and was again breaching the first amendment to the constitution. Despite these attempts, the Supreme Court ruled that soft money was to be remained banned and also the use of issue advocacy (another restriction imposed by the act). Consequently, such a case proves again that attempts to reform the campaign system in the US still remains rather difficult. Before, the banning of soft money, it was generally misused under many guises. Instead of parties using the money for them, the finance has been used to help the presidential candidates in their bid. This certainly calls into question the effectiveness of the act. ...read more.

Democracy requires that it is bought and the only way to enable this is for candidates to show their abilities in so doing. A final prominent factor to failure of reform to the US money system, must take into account what are known as 527 groups. These groups have been named under which their tax code number appears to be. For instance, they are autonomous from the presidential campaign, although they have been raising substantial amounts of money for the elections over years. Under any circumstances, they seem to be uncontrollable and it is apparent that groups such as these are almost a threat to chances for finance improvements in the US. An example of such group includes, 'the swift boat veterans for truth'. To reach a conclusion, the question why is it so difficult to reform campaign finance is one that is very broad. The points listed, has shown that improvements are made extremely difficult and that in spite of the mere attempts they have exerted less influence than they have created greater flaws to the campaign system. So from perspective, reforming the US presidential campaign system is difficult and will remain difficult most importantly due to the constitution itself. ...read more.