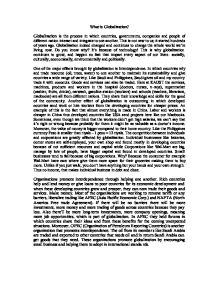 What is Globalization? Globalization is the process in which countries, governments, companies and people of different nation interact and integrate to one another. This is not new to us; it started hundreds of years ago. Globalization indeed changed and continues to change the whole world we're living now. Do you know why? It's because of technology! This is why globalization continues to grow, and happen so fast that impact every aspect of our lives- socially, culturally, economically, environmentally and politically. One of the major effects brought by globalization is Interdependence. In which countries rely and trade resource (oil, trees, water) to one another to maintain its sustainability and give countries a wide range of variety. Like Saudi and Philippines, Saudi gives oil and my country trade it with coconuts. ...read more.

Labor and workers is cheaper in China thus developed countries like USA send projects here like our Macbooks. Sometimes, even though we think that the workers didn't get high salaries, we can't say that it's right or wrong because probably for them it might be as valuable as a doctor's income. Moreover, the value of money is bigger compared to their home country. Like the Philippines currency Peso is smaller than riyals - 1 peso = 12 riyals. The competition between individuals and corporations are greatly affected by globalization. Individual businesses like bakeries, corner stores are self-employed, your own shop and found mostly in developing countries because of not sufficient resources and capital while Corporations like Wal-Mart are big, manage by lots of people, have bigger capital and found in developed countries. ...read more.

Make money. Most of the organizations are working to remove tariffs or any barriers, liberalize trading like APEC (Asia Pacific Economic Corp.) and NAFTA (North America Free trade Agreement). If there will be no barriers there will be more investments, more money and more trading of goods across countries because they pay less. Also there'll be more long-term investments, more company openings, meaning more job opportunities, which is part of globalization. In APEC they held forums in which countries share their ideas and from these benefits for the coming unexpected situations. Moreover, OPEC (Organization of Petroleum Exporting Countries) is another organization that promotes interdependence. The oil from its members like Saudi Arabia are traded and exported to other countries that needs oil and in return Saudi Arabia can get goods that they need. These organizations promote globalization by encouraging small business and helping them to adopt in international standards. ...read more.