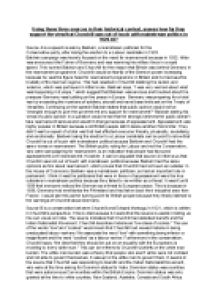 Using these three sources in their historical context, assess how far they support the view that Churchill was out of touch with mainstream politics in 1929-40?

Transfer-Encoding: chunked ﻿Using these three sources in their historical context, assess how far they support the view that Churchill was out of touch with mainstream politics in 1929-40? Source A is a speech made by Baldwin, a mainstream politician for the Conservative party, after losing the election to a Labour candidate in 1933. Baldwin campaign was heavily focused on the need for rearmament because in 1933, Hitler was announced the Fuhrer of Germany and was rearming his military force in a rapid speed. This worried Baldwin and Churchill for the reason that Britain was behind Germany in the rearmament programme. Churchill would be fearful of the German power increasing because he was the figure head for rearmament programme in Britain and he had saw the brutality of the German regime. This had resulted in Churchill disliking the r****m and violence, which was portrayed in Hitler?s rule. Baldwin says, ?I was very worried about what was happening in Europe,? which suggest that Baldwin was anxious and troubled about the pressure Germany was building on the peace in Europe. Germany was preparing for a total war by exceeding the numbers of soldiers, aircraft and naval base limits set on the Treaty of Versailles. Continuing on the speech Baldwin states that public opinion would not be ?changed enough to give the government any support for rearmament?? Baldwin stating his views of public opinion in a question would mean that he strongly believes the public doesn?t take rearmament serious and wouldn?t change because of appeasement. ...read more.

The white man burden was a theory that people who aren?t white were not civilised and not able to govern themselves. It was up to the white man to govern them. It seems in the source that Churchill was responding to Gandhi and the Indian Nationalist Movement, who were at the time asking for Dominion status for India. Dominion status was countries that were autonomous Communities within the British Empire. Dominion status was only granted at the time to white counties; New Zealand, Australia, Canada and South Africa. Amritsar was the spark that lead to India desiring dominion status, which made Churchill more nervous about the growing Indian Nationalist Movement and leader Gandhi. During the 1920s and 1930s British attitudes towards India began to shift because the remarkable protest done by Gandhi and the fact that India had stopped being important to Britain's economy. There was also the fact that Britain gave self-government to the Irish Free State in 1921 and this made it even harder to deny self-government to India. This shows that Churchill?s views of India had caused him to be an outsider in the mainstream politics because he was viewed as an old fashioned politician due to him not accepting the changes in India. However, the source doesn?t mention Churchill viewing India as a crown jewel of Britain. ...read more.

Churchill?s views clashing with the government shows that he is out of touch with mainstream politics. Overall, the crucial motivational role in saving the country from Nazism inevitably vapours everything else about him. He had an unsuccessful flair of finding himself on the wrong side of too many arguments, over things that habitually did not require the benefit of hindsight to be understood. In the 1930s his dismissal of the idea of Indian liberation seemed backward-looking and inhumane even to many of his contemporaries, and his support for the weak and self-obsessed Edward VIII, had appalled politicians. Many people felt that Churchill was simply on another of his bizarre hobbyhorses, and that his latest cranky obsession would end in the usual personal humiliation for him when he spoke about the German threat before the outbreak of the Second World War. This meant that Churchill had not been an outsider in the House of Commons. Baldwin was a mainstream politician, so had an important role in parliament. I think it was the politicians that were in supported the concept of appeasement were the true outsiders in mainstream politics because they failed to view Hitler as a threat. It wasn?t until 1936 that everyone noticed the German as a threat to European peace. This is because in 1936, Germany had remilitarise the Rhineland and had taken back their industrial area from France. I would see this as the turning point for British people because they finally listened to the warnings of Churchill about Germany. ...read more.