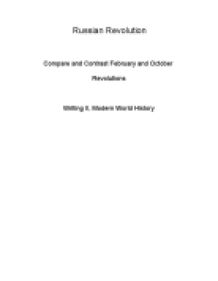 Compare and Contrast the February and October Revolutions in Russia.

Also they were scared to enter the war after so many of their friends and relatives had already perished in the battle fields. Due to this the St. Petersburg garrison sympathized with the public havoc on the streets and joined in with the rioting crowd, rather than destroying the riot with clubs and guns. Much different than in the February Revolution, in the October Revolution military forces played a highly significant role. In fact, Lenin had even formed his own private army, which he called the Red Guard. Later on the Red Guard was made larger so that it became called the Red Army. Its purpose was to eliminate enemies of the Bolshevik regime, and also to fulfill tasks as the assassination of the Romanov family. The Red Army was a type of watchdog for Lenin, since anyone who opposed the Bolshevik ideas was immediately put in place by the Red Army. Undoubtedly, the October Revolution lived from the military strength of the Red Guard much more, than the February Revolution did. The idea of Marxism-Leninism was the proclaimed ideology of Russia after the Bolshevik takeover took place. As the name makes clear, its founders were the German philosopher Karl Marx and Vladimir Lenin. Actually the idea was of Marx?s origin, and he also wrote it down in his book, the Communist Manifesto. However, Lenin deserves to have his name mentioned in the political idea, since he was the one who enforced the belief so much in Russia, and also made it very well known across the whole world. ...read more.

Also the tzar still acted like a puppet master for the prime minister in that time. The Provisional Government in Russia was perhaps the shortest government in office ever. Needless to say, the Provisional Government produced nearly no long-term effects at all. In fact, the reality is that if you ask anybody which government ruled Russia from the time of the February Revolution until the October Revolution, very few people would be able to answer that. After this provisional government was replaced by the Bolsheviks, the Russian Soviet Socialist Republic was introduced, and just four years later the Soviet Union was set up. In summary, the two revolutions were totally different in their happenings, but they had the one similarity that they were so much favored by the people of Russia because of the same reasons. While one served no particular cause, the October Revolution?s clear purpose was to overthrow Russia?s monarchy. Also the October Revolution was much more significant to the events that led up to the creation of the Soviet Union. Another difference was that the army played no role in the February Revolution, while it played a major role in the October Revolution. The one significant similarity between the two revolutions was that the people supported both of them for the same reasons. The two Russian revolutions were rather fascinating in their developments, and led to many important things in later Russian history, like in the creation of the Soviet Union. All in all, it was a great topic to write about. ...read more.