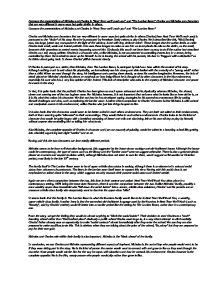 Another direct comparison to Charles' character is that Nicholas is able control and manipulate events in his environment, unlike Charles who just lets things happen to him. It is also ironic that the characters would seem to be better suited in each others environments. They are both not suited to their environments, both of them seeming quite "alienated" to their surroundings. They would thrive in each others environments. Charles looks to be the kind of character that would be quite happy with a breakfast consisting of bread-and-milk and also being left on his own all day to play by himself, without anyone else controlling him or telling him what to do.+ Also Nicholas, the complete opposite of Charles in character and (we can assume) physicality, would be suited to a boarding school life, getting into mischief, organizing late-night "sorties" and so on. Having said this the two characters are from totally different periods. Nicholas seems to be from an Edwardian background, this suggested by the horse-drawn carridge and old-fashioned house. ...read more.

Their decision to send Charles to a "posh" boarding school rather than "that Seaford place" obviously a public school Charles used to go to, is a very direct attempt to climb socially. Charles' father already sees an opportunity to make "social contacts" almost immediately after they enter the school. We see they are also prepared to make sacrifices to do this. This is obvious when they are talking about the price of the school, "its pricey" but they are prepared to pay for their own gain. Nicholas and Charles role within their family is also important. Nicholas is the "black sheep" of the family. In conclusion, we see Charles and Nicholas representing different aspects of boyhood. Nicholas is the sort of boy who people would want to be if they were taking part in the story. He is the kind of person the reader would want to connect with and grow to like as they read through the narrative. Most people would admire him for the way he copes with situations and how he controls his environment. Charles however is the complete opposite. He is the thin, weedy person who people would pity rather than grow to like . ...read more.