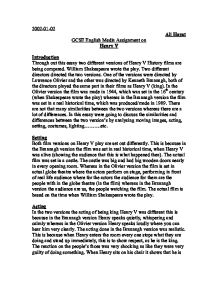 2002-01-02 Ali Hayat GCSE English Media Assignment on Henry V Introduction Through out this essay two different versions of Henry V History films are being compared. William Shakespeare wrote the play. Two different directors directed the two versions. One of the versions were directed by Lawrence Olivier and the other was directed by Kenneth Brannagh, both of the directors played the same part in their films as Henry V (king). In the Olivier version the film was made in 1944, which was set in the 16th century (when Shakespeare wrote the play) whereas in the Brannagh version the film was set in a real historical time, which was produced/made in 1989. There are not that many similarities between the two versions whereas there are a lot of differences. In this essay were going to discuss the similarities and differences between the two version's by analysing moving images, acting, setting, costumes, lighting..........etc. Setting Both film versions on Henry V play are set out differently. This is because in the Brannagh version the film was set in real historical time, when Henry V was alive (showing the audience that this is what happened then). ...read more.

The acting shown in this version is more of a play. Costumes/Props Throughout the two films we see different characters wearing different costumes and using different props. We see in the Brannagh version when Canterbury and Ealley talk they are wearing very dark and dull clothing using their prop, which was a candlestick. This shows the audience that during the time which the film was made in their were no lights invented, as well as this when Henry enters the room there is no sign of him being the king of England. This is because they haven't used a prop to show how Henry is represented to be king of England. When the messenger of France arrived they have used a prop, which was a casket full of tennis balls. The casket looked realistic whereas in the Olivier version the casket was very colourful. In the Olivier version the audience can tell us that Henry is the king, since he is wearing a crown as well as a traditional king cloak these two things are very notable. The costumes used in the Olivier version are all very colourful, throughout the film we see the bishops (Canterbury and Ealley) ...read more.