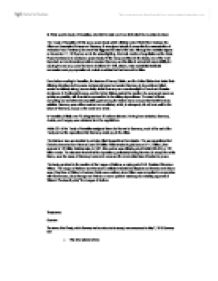 Course Essay - What was the treaty of Versailles, what did it contain and how did it affect the countries involved.

Q. What was the treaty of Versailles, what did it contain and how did it affect the countries involved. The Treaty of Versailles (1919) was a peace treaty which officially ended World War I between the Allied and Associated Powers and Germany. It was signed exactly 5 years after the assassination of Archduke Franz Ferdinand, the event that triggered the start of the war. Although the armistice signed on November 11, 1918 put an end to the actual fighting, it took six months of negotiations at the Paris Peace Conference to conclude a peace treaty. Of the many provisions in the treaty, one of the most important and controversial provisions required Germany and its allies to accept full responsibility for causing the war and, under the terms of articles 231-248, disarm, make substantial territorial concessions and pay reparations to certain countries that had formed the Allies. ...read more.

The total sum due was decided by an Inter-Allied Reparations Commission. The war reparations that Entente demanded from Germany was 226 billion Reichsmarks in gold (around �11.3 billion), then reduced to 132 billion Reichsmarks. In 1921, this number was officially put at �4,990,000,000, or 132 billion marks. The standard view is that the reparations, particularly forcing Germany to accept the entire blame, were the cause of Germany's economic woes and the concomitant rise of Nazism to power. The treaty provided for the creation of the League of Nations, a major goal of U.S. President Woodrow Wilson. The League of Nations was intended to arbitrate international disputes and thereby avoid future wars. Only three of Wilson's Fourteen Points were realized, since Wilson was compelled to compromise with Clemenceau, Lloyd George and Orlando on some points in exchange for retaining approval of Wilson's "fourteenth point," the League of Nations Treaty terms Overview The terms of the Treaty, which Germany had no choice but to accept, were announced on May 7, 1919. ...read more.