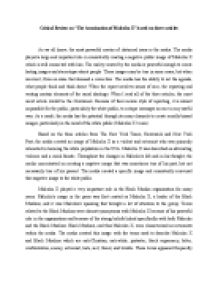 Critical Review on The Assasination of Malcolm X based on three articles from The New York Times, Newsweek and New York Post.

﻿Critical Review on ?The Assasination of Malcolm X? based on three articles As we all know, the most powerful creator of rhetorical issue is the media. The media played a large and important role in consistently creating a negative public image of Malcolm X which is still connected with him. The reality created by the media is powerful enough to create lasting images and stereotypes about people. These images may be true in some cases, but when incorrect, form an issue that demand a correction. The media has the ability to set the agenda, what people think and think about. When the report involves issues of race, the reporting and writing contain elements of the racial ideology. When I read all of the three articles, the most racist article would be the Newsweek. Because of their racism style of reporting, it is almost impossible for the public, particularly the white public, to critique messages on race in any useful way. As a result, the media has the potential through its many channels to create racially biased images, particularly in the mind of the white public (Malcolm X?s case). Based on the three articles from The New York Times, Newsweek and New York Post, the media created an image of Malcolm X as a violent and extremist who was primarily interested in harming the white population in the USA. ...read more.

From all those three articles, we can see that the most neutral report was from The New York Times. I cannot sense any biasness in their report. It is the same with report from New York Post. The writer of New York Post delivered the report more like a story telling because he or she was at the crime scene. From the article, we as readers can feel the fears during the awful tragedy. As we all know, Malcolm X was powerful. His skill and strength as a speaker are a evidence to that fact. The portrayal of power as related to Malcolm X turned negative quickly. Malcolm gained popularity and became a threat to Elijah Muhammad's leadership of the Black Muslims. Popularity had contributed to Malcolm's power and it could be and probably was seen as a threat to the Black Muslims, possibly contributing to the theory that some within the Black Muslim organization wanted Malcolm dead. The media connected Malcolm X with a negative image of power by using terms such as demagogue, evil, followers, fiery, icon, rival and split. These terms helped to shape the negative image of Malcolm X. Most of the terms can be seen from the Newsweek article. ...read more.

The media also only showed Malcolm X as violent and did not explain his philosophy of self-defense. As such, his essence in the media was violence. The media characterized Malcolm X by using few characteristics of extremism, power, violence and desperado without knowing of who he was. The issues of his past were brought up among the group of Black Muslims to show his faith, perseverance, and success in beating that past. The media also did not report on Malcolm?s later beliefs. Finally, the media otherized Malcolm X in that the characteristics attributed to him made him appear strange and different. His image in the white public was one of a wild, untouchable, extremist desperado. Because of that, he appeared to be unapproachable, which created fear in the white public. The media was successful in creating an image of Malcolm X as wild so that the white public viewed him as other than he was. He became a wild, exotic being within the media created reality. Last but not least, we can say that the print media is powerful that has the power to create reality. In the case of Malcolm X, the media-created reality was a damaging situation. SKBI 6053 READING: THEORY AND PRACTICE CRITICAL REVIEW ON ?THE ASSASINATION OF MALCOLM X? PREPARED FOR: PROF. MADYA DR. RADHA M.K. NAMBIAR PREPARED BY: ANIS AZMA LAILY BINTI ABDUL AZIZ ...read more.