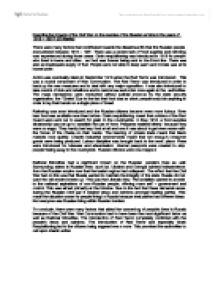 Describe the impacts of the Civil War on the peoples of the Russian empire in the years of 1918 &quot; 1921?

Describe the impacts of the Civil War on the peoples of the Russian empire in the years of 1918 - 1921? (20 Marks) There were many factors that contributed towards the disastrous life that the Russian people encountered between 1918 - 1921. There was a severe lack of food supplies and rationing was experienced during those years. Grain requisitioning was introduced in 1918 for people who lived in towns and cities , as food was forever being sent to the Front line .There was also an inadequate supply of fuel. People were not able to keep warm and morale was at its lowest point. Action was eventually taken in September 1918 when the Red Terror was introduced. ...read more.

Even less food was available now than before. Grain requisitioning meant that soldiers of the Red Guard were sent out to search for grain in the countryside. In May 1918, a food supplies dictatorship was set up to establish the use of force. Peasants resisted bitterly because they were so angry. They hardly had any food at all and now it was about to get even worse with the forces of the Cheka on their backs. The banning of private trade meant that black markets rose quickly. Chaotic industrial environments meant that not enough consumer goods were being produced. Labour discipline was brought back to the work place. Fines were introduced for lateness and absenteeism. Internal passports were created to stop people fleeing away to the countryside. Russian citizens were now trapped. ...read more.

This was the Liberals view. The socialists wanted to accede to the national aspirations of non-Russian people, offering more self - government and control. This was aimed primarily at the Ukraine. Due to the fact that these demands arose during the Russian Civil war it created views and opinions amongst leading parties. This made the situation worse for people living in Russia because rival parties had different ideas. Not everyone was Russian living within Russian borders. To conclude, there were many factors that aided the worsening of people's lives in Russia because of the Civil War. War Communism had to have been the most significant factor as well as National Minorities. The introduction of Red Terror completely conflicted with the people's views and opinions. The introduction of Red Terror and especially Grain Requisitioning led to the citizens being angered even more. This provoked the authorities to call upon drastic action. ...read more.