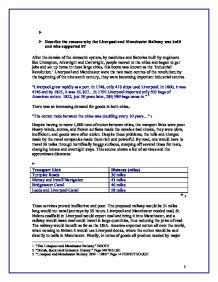 Describe the reasons why the Liverpool and Manchester Railway was built and who supported it?

> > Describe the reasons why the Liverpool and Manchester Railway was built and who supported it? After the demise of the domestic system, by machines and factories built by engineers like Crompton, Arkwright and Cartwright, people moved to the cities and began to get jobs and set up home in these large cities, this boom was known as the 'Industrial Revolution.' Liverpool and Manchester were the two main centres of the revolution; by the beginning of the nineteenth century, they were becoming important industrial centres. "Liverpool grew rapidly as a port. In 1748, only 476 ships used Liverpool. In 1800, it was 4746 and by 1825, it was 19, 837...In 1792 Liverpool imported only 503 bags of American cotton. 1822, just 30 years later, 289, 989 bags came in." 1 There was an increasing demand for goods in both cities, "The cotton trade between the cities was doubling every 10 years..." 2 Despite having to move 1,000 tons of cotton between cities, the transport links were poor. Heavy winds, storms, and frozen surfaces made the canals a bad choice, they were slow, inefficient, and goods were often stolen. Despite these problems, the tolls and charges made by the canal companies made them rich and powerful. By road, one would have to travel 36 miles through horrifically boggy surfaces, stooping off several times for rests, changing horses and overnight stays. ...read more.

As well as Stephenson's work, many people also sent petitions, this included canal companies, small landowners, Earls, and Dukes. George Stephenson was found at fault for the rejection and sacked. > Who opposed the building of the Liverpool and Manchester Railway and why? In 1825, the first Liverpool and Manchester railway bill was defeated in parliament due to many reasons. Although Stephenson's survey was greatly blamed for the rejection of the line, a crucial reason was the fierce opposition to the line. The proposed railway aroused much opposition, particularly from those with interest in he canals, and big landowners, they certainly had a reason to be concerned. The opposition was led by powerful landowners, the earls of Derby and Sefton, and the Duke of Bridgewater, they all owned land across the anticipated route. They assumed that their land would be cut in half, smaller landowners also supported this. However, they said their strongest concern was the damage to the 'environment.' Landowners claimed that the new railway would prevent: '...Cows from gazing...stop hens laying and that poisonous fumes from the engine would kill passing birds." 1. Earls of Sefton and Derby were worried that foxes and game birds would die, nevertheless, there true concern was that foxes and bird hunting would stop, thus preventing them from taking part in their favorite sport. They claimed: "In any case, the railway would never work." ...read more.