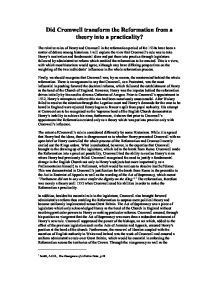 Did Cromwell transform the Reformation from a theory into a practicality?

Did Cromwell transform the Reformation from a theory into a practicality? The relative roles of Henry and Cromwell in the reformation period of the 1530s have been a matter of debate among historians. I will explore the view that Cromwell's role was to take Henry's motivation and fundamental ideas and put them into practice through legislature followed by administrative reform which enabled the reformation to be enacted. This is a view, with which most historians would agree, although may have differing perspectives on the weighting of the two individuals' influences in the whole reformation process. Firstly, we should recognise that Cromwell was, by no means, the mastermind behind the whole reformation. There is an argument to say that Cromwell, as a Protestant, was the most influential in pushing forward the doctrinal reforms, which followed the establishment of Henry as the head of the Church of England. ...read more.

What is undoubted, however, is the expertise that Cromwell brought to the drawing up of the legislature, which led to the break from Rome. Cromwell made the Reformation into a practical possibility, Cromwell had the ability to realise Henry's aims where Henry had previously failed. Cromwell recognised the need to justify a fundamental change in the English Church not only to Henry's subjects but more importantly, as a Parliamentarian himself, to a Parliament, which would be anxious to absolve itself of blame. This was demonstrated in Cromwell's justification for the break from Rome in the preamble to the Act in Restraint of Appeals as well as the wording of the Act of Supremacy, which meant "Parliament did not in any sense confer the dignity on the King." 1 The reformation, therefore was merely a theory until 1532 when Cromwell used his abilities in order to make the Reformation a practicality. ...read more.

Cromwell, therefore, can be considered to have transformed the reformation from a theory into a practicality in two ways. Firstly, by taking the ideas of the King and using his expertise to implement them in terms of legislature. Secondly, and more significantly, Cromwell ensured that the reforms set out in the legislature were enforced in practise giving Henry practical rather than theoretical power. It is clear that Henry and Cromwell worked as a pair in the process of the Reformation. The impetus came from Henry but the essential legislature that made the Reformation a practicality followed in 1532 after Cromwell's appointment and a period in which Henry had failed to realise his aims. Cromwell's abilities in drawing up the legislature transformed Henry's ideas into reality while his administrative reform and use of the vicegerency were arguably the most important in implementing and enforcing the Reformation. 1 Smith, A.G.R., The Emergence of a Nation State, p.24 ...read more.