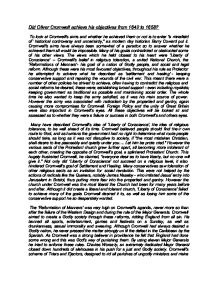 Did Oliver Cromwell achieve his objectives from 1642 to 1658?

Did Oliver Cromwell achieve his objectives from 1642 to 1658? To look at Cromwell's aims and whether he achieved them or not is to enter "a minefield of` historical controversy and uncertainty," as modern day historian Barry Coward put it. Cromwell's aims have always been somewhat of a paradox so to answer whether he achieved them all would be impossible. Many of his goals contradicted or obstructed some of his other views. The views which he held closest to his heart were 'Liberty of Conscience' - Cromwell's belief in religious toleration, a united National Church, the 'Reformations of Manners'- his goal of a nation of Godly people, and social and legal reform. Although these were his most favoured objectives, throughout his rule as Protector he attempted to achieve what he described as 'settlement and healing'- keeping conservative support and repairing the wounds of the civil war. This meant there were a number of other policies he strived to achieve, often having to contradict the religious and social reforms he desired, these were; establishing broad support- even including royalists; keeping government as traditional as possible and maintaining social order. The whole time he also wanted to keep the army satisfied, as it was his main source of power. However the army was associated with radicalism by the propertied and gentry, again causing more compromises for Cromwell. ...read more.

However he did say, "if there be any that makes poor to make a few rich that suits not a commonwealth." He felt the rich had a responsibility to the poor. Although not high on his agenda, he did make a few educational and local government reforms. He urged JP's to administer local matters, including poor relief. Evidence suggests that under Cromwell local governments worked just as, if not more' efficiently than they had done for years before or after. Cromwell also strived to create a legal system more accessible to the public. The language of the court was changed from Latin to English. He made access to the Court of Chancery cheaper and made law plain and simple. His socials reforms as a whole were a success, you could argue he had little part to play in the efficiency of local government, but there was little hostility from the local governments, mainly comprised of the same people who were there before the civil war. Barry Coward said Cromwell's "major political achievement was to make a republican government acceptable in a country in which monarchical government was overwhelmingly the one people preferred." This can be put down to Cromwell's work towards 'settlement and healing', which often hindered the reforming work he also desired to do. ...read more.

This debate is made over a number of issues, including the trade treaty with Sweden and the alliance with the French against Spain. Regardless of his motives, Cromwell improved the nation's international standing considerably and prevented any invasions. Cromwell was however extremely disappointed with the failure of the Western Design, where his fleet were badly defeated by the Spanish in the Caribbean. Maybe set against Cromwell's ideological objectives this was a failure, there was no glorious victory over Catholicism. However I would argue Cromwell's foreign policy was one of the, if not the most successful of Cromwell's objectives. Religious reforms seem to be what Cromwell held dearest to his heart, the vision of a 'New Jerusalem' in England, free of sin and a united national church. As these were never realised it would be hard to argue as a whole that Cromwell achieved his goals, in fact he got nowhere near. However his attempts to heal the wounds of the civil war and gain the support of the landed classes have to be described as a success. He made a republic government acceptable in a country that was ideologically hostile towards one. His success abroad highlights Cromwell's skill as a politician and it is unlikely that any man could have achieved what he had hoped to achieve. To call Cromwell's reign as a failure is far from the truth. To say he achieved his objectives, however, is a huge overstatement. 2,012 words Tim Akers ...read more.

This is an excellent response that addresses the question well throughout and, with the exception of one slip into narrative, provides balanced and well supported explanation and evaluation. 5 out of 5 stars.