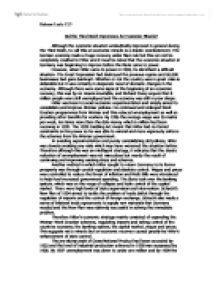 Did the Third Reich Experience An Economic Miracle?

Did the Third Reich Experience An Economic Miracle? Although the economic situation undoubtedly improved in general during the Third Reich, to call this an economic miracle is a drastic overstatement. The German economy made a huge recovery under Nazi rule but this can not be completely credited to Hitler and it must be noted that the economic situation in Germany was beginning to improve before the Nazis came to power. However, when Hitler came to power in 1933, he did inherit a difficult situation. The Great Depression had destroyed the previous regime and 50,000 businesses had gone bankrupt. Whether or not the country was in great crisis is debatable but it was certainly in desperate need of dramatic changes in the economy. Although there were some signs of the beginning of an economic recovery, this was by no means inevitable, and Richard Overy argues that 8 million people were still unemployed and the economy was still in poor shape. Hitler was keen to avoid economic experimentation and simply aimed to consolidate and improve Weimar policies. ...read more.

The State took over the banking system, which was on the verge of collapse and took control of the capital market. There were high levels of state supervision and intervention. Schacht's New Plan of 1934 aimed to tackle the problem of trade deficit through the regulation of imports and the control of foreign exchange. Schacht also made a series of bilateral trade agreements to supply raw materials that Germany needed and the New Plan was relatively successful in solving the immediate problem. Therefore Hitler's economic strategy mainly consisted of expanding the Weimar Work Creation schemes, regulating imports and taking control of the countries economy; the banking system, the capital market, wages and prices. This suggests not a miracle but an economic recovery caused greatly by Hitler's enhancement of state control. The pre-slump peak of Gross National Product had been exceeded by 1935 and the level of industrial production achieved in 1928 was surpassed by 1936. By 1937 unemployment was down to under one million and by 1939 the German economy had grown 33% above its late 1920s peak. ...read more.

Hitler's strong focus on rearmament however, had a detrimental effect on the country's economy. Hitler wanted to be ready for war within four years and the excessive pace of rearmament meant that the German economy was overheating. Mason has argued that the economy was under great strain as a result of the emphasis placed on rearmament and autarky- a strategy to make Germany as self-sufficient as possible. Therefore although Germany's economy did make a significant recovery during the Third Reich, there were also negative aspects to the Nazi regimes economic policies. However despite this, the improvement in Germany's economy was extremely impressive. This should not be classed as a miracle but rather as an impressive recovery from a grim situation due to the consolidation of Weimar ideas enforced more vigorously with increased government funding and greater state control. The economic recovery was remarkable considering the country's economic state when Hitler first came to power but 'miracle' is too powerful a term. By 1938 the GNP had increased by about 75% which is undoubtedly spectacular but is purely evidence of successful governmental strategies- not a 'miracle'. Rebecca Leslie 12.3 ...read more.