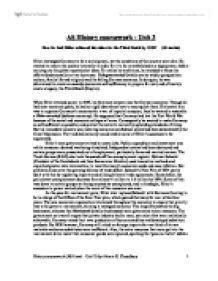 How far had Hitler achieved his Third Reich?

AS History coursework - Unit 3 How far had Hitler achieved his vision for the Third Reich by 1939? (60 marks) Hitler envisaged Germany to be a world power, yet the conditions of the country were dire. He wanted to restore the country internally in order for it to be re-established as a superpower, before carrying out his global expansionist ideas. To realise his ambitions, he intended to focus his efforts fundamentally on two key areas: Volksgemeinshaft (which can be widely grouped into culture, family life and religion) and the failing German economy. In doing so, he was determined to create an autarky (economic self-sufficiency to prepare for war) and ultimately create a legacy, the Third Reich (Empire). When Hitler attained power in 1933, his foremost concern was the German economy. Though he had clear economic goals, he had no rigid ideas about how to accomplish them. His central aim was to organise Germany's resources for a war of imperial conquest, thus he wanted to assemble a Wehrwirtschaft (defence economy). He supposed that Germany had lost the First World War because of the social and economic collapse at home. Consequently he wanted to make Germany as self-sufficient as possible, and protect the nation's morale by upholding standards of living. But his immediate concern was restoring economic confidence which had been devastated by the Great Depression. The troubled economy would enable some of Hitler's successes to be augmented. Hitler's new government strived to create jobs. Public expenditure and investment rose whilst consumer demand was being stimulated. Independent unions had been destroyed and certain groups were pressurised out of employment, particularly Jews and married women. ...read more.

As the constant discrimination of Jews curtailed in 1934, the lack of solutions towards the 'Jewish problem' generated frustration amongst the n**i extremists, who were calling for more action. This spurred Hitler to fashion up the Nuremburg Laws which were issued on 15 September 1935. It actively prevented Jews (who were considered as a totally separate race) from being able to do a number of things (mainly the following); they were banned from marriages and s*x with Germans and were denied the right to a German citizenship. The persecution of Jews had already existed in many countries for centuries, but in Germany they were now officially labelled as second class. As a result, it became necessary to define Jewishness; n**i ideology distinguished Jews as not a religion but a race. This was inconsistent with the 'First Supplementary Decree to the Reich Citizenship Law', where the definition was based around 'the Jewish religious community'. This complicated the process of classifying Jews from the Germans, even more so because it was now crucial to have proof of Aryan ancestry. The increasing force of anti-Semitism erupted during the night of 9-10 November 1938, when unprecedented violence broke out. Kristallnacht (Night of Broken Glass) exhibited attacks on the Jewish society. This hostile intolerance dented economic prospects as numerous businesses were damaged, thus hindering economic stability. Even worse, Goering (who was the Economics minister at this time) callously fined the Jews RM 1 billion for the destruction, and a new decree blocked Jews from economic activity. This hastened the radicalising Aryanisation plan but hampered an important segment of the economy, even though the war efforts overruled all other areas. ...read more.

This pushed many women, mostly young, into mundane, low-paid positions, where there were lots of employees. From 1935, even the number of women in the army increased. This illustrates that women were squeezed out of better paid jobs into more physical trades, risking their health and degrading the family system. Overall, it would appear that Hitler's domestic priorities developed and changed between 1933 and 1939. His first objective was to aid Germany's recovery from the Depression and reduce unemployment. This phase was successful as it created a newfound sense of optimism and made Hitler very popular. However, the autarky system failed because Germany was not able to become entirely self-reliant as Hitler had hoped, despite massively increasing production in several sectors. As for the Volksgemeinshaft, the Nazis swiftly purged those who were abnormal in the contexts of ideology, biology, and socially. There was little opposition while it was taking place, which may suggest that perhaps n**i ideology was being accepted, or maybe people were too afraid. Additionally, youth and women faced similar consequences as most conformed whilst a few disobeyed. Education had deteriorated to such an extent that "they were incapable of either providing political leadership in the future or contributing the intellectual and technical skills necessary for running a modern industrial society"1. Distinctly, religion was perhaps another of the Nazis' most observable failure, since they were not able to infuse their n**i principles into the churches. All in all, there were also several aims Hitler could not complete. These were either at the expense of others, too unrealistic, and/or due to the short time span of 6 years. Some failures even occurred as a result of counterproductive n**i tactics. Therefore the Third Reich was partially accomplished. ...read more.