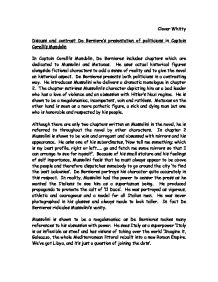 Clover Whitty Discuss and contrast De Berniere's presentation of politicians in Captain Corelli's Mandolin In Captain Corelli's Mandolin, De Bernieres includes chapters which are dedicated to Mussolini and Metaxas. He uses actual historical figures alongside fictional characters to add a sense of reality and to give the novel an historical aspect. De Bernieres presents both politicians in a contrasting way. He introduces Mussolini who delivers a dramatic monologue in chapter 2. The chapter satirises Mussolini's character depicting him as a bad leader who has a love of violence and an obsession with Hitler's Nazi regime. He is shown to be a megalomaniac, incompetent, vain and ruthless. Metaxas on the other hand is seen as a more pathetic figure, a sick and dying man but one who is honorable and respected by his people. Although there are only two chapters written on Mussolini in the novel, he is referred to throughout the novel by other characters. In chapter 2 Mussolini is shown to be vain and arrogant and obsessed with mirrors and his appearance. He asks one of his subordinates, 'Now tell me something; which is my best profile, right or left..... ...read more.

De Bernieres shows Mussolini to be cowardly. At the end of chapter 2, he shoots the cat and makes himself sick. He is shown to be pathetic which contrasts with the destructiveness and death he has caused within the war. It shows he is the one who never gets his hands dirty as he can't bar the sight of the dead cat. He thinks that by cleaning the corpse up, that the situation will be rectified. These are not the reactions that would be expected of a man in his position. As well as Mussolini's monologue in chapter 2, chapter 35 also gives an insight to how he is viewed as a ridiculous character. The pamphlet that has been distributed on the island has possibly been written by an Italian soldier. It is a parody of a propaganda pamphlet and initially pretends to idolize Mussolini but is actually written in a sarcastic tone. Mussolini's many achievements are referred to in a mocking way. 'This ludicrous buffoon, owner of a thousand florid uniforms covered with spurious medal ribbons for acts of valour that he has never performed'. References are also made to Mussolini's incompetence in Carlo's narrations and the impression is given that Mussolini is not quite the super human that he was made out to be. ...read more.

Metaxas is shown to be fallible whereas Mussolini wants to be seen as 'an apotheosis of the Italian ideal'. Metaxas on the other hand is shown to have normal concerns like trying to control he wayward daughter, who has a reputation for her licentious lifestyle. His worries about his daughter lead him to be unfocused on what he is meant to be doing as he misses a meeting with the British minister. De Bernieres shows Metaxas to be an honest and uncorrupted person and research shows that he was looked upon to be a good prime minister by the Greek people. 'Metaxas was an honest politician, you see. He was never accused of corruption even by his enemies'. He seems to be respected by the Greek people. His house is described as a fairly modest 'pseudo-Byzantiane' villa. He never used state funds to embellish his lifestyle as Ciano observes 'There could not have been a man more different from the Duce'. The main two political figures that De Bernieres includes in the novel are shown to have contrasting characters, although the author describes them in a humourous way which is quite far fetched at times, he manages to show how futile the war and politicians are. ...read more.