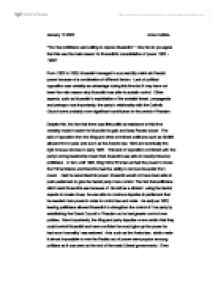 ''Too few politicians were willing to oppose Mussolini.'' How far do you agree that this was the main reason for Mussolini's consolidation of power 1922-1928?

January 15 2005 Anna Carlisle ''Too few politicians were willing to oppose Mussolini.'' How far do you agree that this was the main reason for Mussolini's consolidation of power 1922-1928? From 1922 to 1928, Mussolini managed to successfully maintain Fascist power because of a combination of different factors. Lack of political opposition was certainly an advantage during this time but it may have not been the main reason why Mussolini was able to sustain control. Other aspects, such as Mussolini's exploitation of the socialist threat, propaganda and perhaps most importantly, the party's relationship with the Catholic Church were probably more significant contributors to the period of Fascism. Despite this, the fact that there was little political resistance at this time certainly made it easier for Mussolini to gain and keep Facsist power. The lack of oppostion from the King and other prominent politicans such as Giollitti allowed him to pass acts such as the Aceobo law 1924 and eventually the right to issue decrees in early 1926. ...read more.

Evidently, the lack of opposition was an imprtant reason why the fascists were able to gain control as it meant it was easier to enforce his policies but Mussolini himself played a vital role in consolidating his own power- without his influencal nature and ability at expoliting Italy's frail system of government, he wouldn't have been able to persuade politicians that he alone could solve Italy's problems. The economic circumstance at the time also contributed to Mussolini retaining his power. He was lucky in the sense that industry was booming when he came to power which he took credit for. Eg: 1922-1925 exports in cars and textiles doubled. In contrast to the Liberal governments, Mussolini seemed, for a short time, to be making a difference. Mussolini further emphasised his role as a powerful leader with his heavy propaganda campaign which was also an principal reason why Mussolini was able to consolidate power at this time. 'The Myth of the Duce' presented him as an omnipotent and omniscient leader- eg: the words 'Mussolini is always right' appeared in every classroom and his 'ppolo d'Italia' further exaggerated the socialist threat. ...read more.

Both parties benefited form the pact: Catholism was made the official religion of state and Priests empahaised the good points of the facsits regeime in sermons. With the support of the Populari', Mussolini was ablw to pass the Acebo Law' in 1924 to ensure the fascists could be almost guaranteed to remain in power. While relations with the church were successful, Mussolini remained firmly in power. It was true that too few politicians were prepared to oppose Mussolini but this was only because of his ability to exploit politican's fears in order to keep opposition under control. The reason why they were unwilling to dispute him was because of Mussolinis support from the catholic church, which gave him a political and moral advantage. Although other key interest groups were important in helping Mussolini gain power, it was the Church which held a significant role in society that promoted and sustained Fascist views. It was only after the relationship with the church began to cool in 1931 after the fascist attack on Catholic youth groups and introduced a policy of anti-semnitism that Fascist rule began to decline. ...read more.