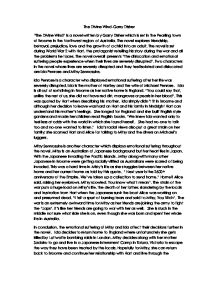 The Divine Wind-Garry Disher "The Divine Wind" is a novel written by Garry Disher which is set in the Pearling town of Broome in the Northwest region of Australia. The novel explores friendship, betrayal, prejudice, love and the growth of a child into an adult. The novel is set during World War 2 with Hart, the protagonist retelling his story during the war and all the problems he faces. The novel overall presents "the dislocation and emotional suffering people experience when their lives are severely disrupted". Two characters in the novel whose lives are severely disrupted and they feel isolated and dislocated are Ida Penrose and Mitsy Sennosuke. Ida Penrose is a character who displayed emotional suffering after her life was severely disrupted. ...read more.

"We knew Ida wanted only to feel less at odds with the world in which she found herself. She had no-one to talk too and no-one wanted to listen." Ida's racial views also put a great strain on her family; she scorned Hart and Alice for talking to Mitsy and the divers on Michael's luggers. Mitsy Sennosuke is another character which displays emotional suffering throughout the novel. Mitsy is an Australian of Japanese background but her heart lies in Japan. With the Japanese invading the Pacific islands, Mitsy along with many other Japanese in Broome were getting racially vilified as Australians were scared of being invaded. This was a hard time in Misty's life as she struggles between her native home and her current home as told by this quote. ...read more.

It's like her friends are going to war with her as well. She is stuck in the middle not sure what side she is on, even though she was born and spent her whole life in Australia. In conclusion, the emotional suffering of Mitsy and Ida affect their decisions further in the novel. Ida decides to return home to England where unfortunately she gets killed by Luftwaffe bombing raids in London. Mitsy decides along with her mother Sadako to go and live in a Japanese Internment Camp in Tatura, Victoria to escape the way they have been treated by the locals. Hopefully for Mitsy, she can return back to Broome and continue her relationship with Hart and live through the prejudice now the war is over. "They will shout at Mitsy. It won't be easy. We may not make it. ...read more.