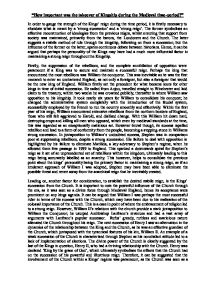 How important was the takeover of Kingship during the Medieval time-period?

"How important was the takeover of Kingship during the Medieval time-period?" In order to gauge the strength of the Kings' reign during the time period, it is firstly necessary to elucidate what is meant by a 'strong succession' and a 'strong reign'. The former symbolises an effective reconstruction of ideologies from the previous reigns, whilst ensuring that support from society was maintained, primarily from the barons, the Londoners and the Church. The latter suggests a stabile method of rule through the kingship, following on from a succession; but the influence of the former on the latter, sparks continuous debate between historians. Hence, it can be argued that perhaps the personality of the Kings may have had a much more influential factor in maintaining a strong reign throughout the Kingship. Firstly, the suppression of the rebellions, and the complete annihilation of opposition were paramount if a King was to secure and maintain a successful reign. Perhaps the king that encountered the most rebellions was William the conqueror. This was inevitable as he was the first monarch to enter an unchartered England, as not only a foreigner, but also a foreigner that would be the new king of England. ...read more.

It is important to note the powerful influence of the Church through the era, as it was seen as a divine force through Medieval England, hence its acceptance were prominent on any kings agenda. It can be argued that William I was perhaps the most successful ruler in terms of his success with the Church, which may have been due to his realisation of the colossal importance of the Church. This is a case in point of where the embracement of religion led to a strong reign. However, William II's relations with the church provide a stark juxtaposition to William the Conqueror; he usurped Archbishop Lanfranc's revenues and had a vast array of arguments with Lanfranc's popular successor. Rufus' greedy, ruthless and avaricious nature alienated the Church throughout his reign. The next succession of Henry I saw an alternation in the dynamics of the relationship between the King and the Church, as he was an effective guardian of the Church, which juxtaposed with the tyrannical features of his kin, William II. An example of a weak succession of the Church is characterised through Stephen as his nonchalant attitude led to a lack of implementation of elections. ...read more.

On the whole, the loyalty of the barons, particularly through Henry II shows that a strong succession did lead to a strong reign, which is signified through his relationship with the Barons. He took it upon himself to restructure government through significant changes in order to stabilise the government of England. In conclusion, it can be deduced that a strong succession did not guarantee a strong reign as even though the suppression of rebellions were paramount to any king who strived to maintain stability, other factors played a much greater factor in ensuring order was maintained through the kingship. The strength of each king, symbolised through their individual personalities, the maintenance of a well-organised kingdom and the ability to keep satisfy authority, would have ultimately played a much more influential role in ensuring a strong reign. Nevertheless, it would be na�ve to suggest that the succession was irrelevant; as a powerful succession would have demonstrated the divine power of the King, leading to a greater respect from society. Therefore, in order to maintain a strong reign, a King's rule is not only characterised by an effective succession, a dominant personality and a meticulous approach to maintaining order within the kingdom is paramount to achieve order and stability, hence, leading to a strong reign. ...read more.