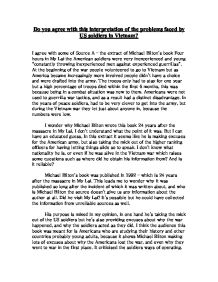 Do You Agree With Source A? The Problems Faced By US Soldiers In Vietnam

Do you agree with this interpretation of the problems faced by US soldiers in Vietnam? I agree with some of Source A - the extract of Michael Bilton's book Four hours in My Lai the American soldiers were very inexperienced and young "constantly throwing inexperienced men against experienced guerrillas". At the beginning of the war people volunteered to go to Vietnam but as America became increasingly more involved people didn't have a choice and were drafted into the army. The troops only had to stay for one year but a high percentage of troops died within the first 6 months, this was because being in a combat situation was new to them. Americans were not used to guerrilla war tactics, and as a result had a distinct disadvantage. In the years of peace soldiers, had to be very clever to get into the army, but during the Vietnam war they let just about anyone in, because the numbers were low. ...read more.

It's possible but he could have collected the information from unreliable sources as well. His purpose is mixed in my opinion, in one hand he's taking the mick out of the US soldiers but he's also providing excuses about why the war happened, and why the soldiers acted as they did. I think the audience this book was meant for is Americans who are studying their history and other countries probably young adults, because it shows Michael Bilton making lots of excuses about why the Americans lost the war, and even why they went to war in the first place. It criticised the soldiers ways of operating. People were drafted in the army without a choice, black men, and poor white me were sent to Vietnam, whereas well educated white men could put off their tour of duty - which only lasted one year - if they were at university or doing a degree or something similar, it all seems very unfair. ...read more.

I don't agree with the fact that 'Soldiers were most likely to die in the first month.' Because there is contradicting evidence that says the large majority of deaths took place in the first six months, not one. I think there are many reasons to agree and disagree with this extract, however I think that I would say I agree because there is more supporting evidence for the low test scores, and the inexperienced men the things that I agree with far outweigh the things that I disagree with. Altogether though I really would prefer to read the whole book before putting forward my opinion, we are relying on a very small set of information but I believe that Michael Bilton wrote this book because he sympathised with the people who were massacred in My Lai for no reason. And they deserved better so he wants to try and focus on the bad points of what the Americans did. Laura M. ...read more.