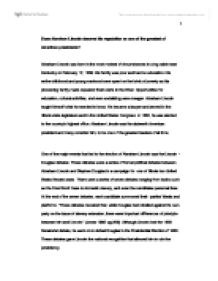 Does Abraham Lincoln deserve his reputation as one of the greatest of American presidents?

Does Abraham Lincoln deserve his reputation as one of the greatest of American presidents? Abraham Lincoln was born in the most modest of circumstances in a log cabin near Kentucky on February 12, 1809. His family was poor and had no education. His entire childhood and young manhood were spent on the brink of poverty as his pioneering family made repeated fresh starts in the West. Opportunities for education, cultural activities, and even socializing were meager. Abraham Lincoln taught himself what he needed to know. He became a lawyer and served in the Illinois state legislature and in the United States Congress. In 1860, he was elected to the country's highest office. Abraham Lincoln was the sixteenth American president and many consider him, to be one of the greatest leaders of all time. One of the major events that led to the election of Abraham Lincoln was the Lincoln-Douglas debates. These debates were a series of formal political debates between Abraham Lincoln and Stephen Douglas in a campaign for one of Illinois two United States Senate seats. There were a series of seven debates ranging from topics such as the Dred Scott Case to domestic slavery, and even the candidates personal lives. At the end of the seven debates, each candidate summoned their parties' ideals and platforms. ...read more.

But the proclamation did show Americans, and the world, that the civil war was now being fought to end slavery. Lincoln was reluctant to take this position, as a believer in white supremacy, he initially viewed the war in terms of preserving the Union. As pressure for abolition mounted in Congress and the country, Lincoln became more sympathetic to the idea. Although the Emancipation Proclamation did not end slavery in America, it did make that accomplishment a basic war goal and a virtual certainty. He was the first Republican president, and the Union ended the claim that state sovereignty superseded federal authority forever. "In pursuing victory, Lincoln assumed extra-legal powers over the press, virtually ignored the Supreme Court, declared martial law in areas where no military action justified it, quelled draft riots with armed soldiers, and drafted soldiers to fight for the Union cause. No president in history had ever exerted so much executive authority, but he did so not for personal power but in order to preserve the Union." (website: The American President) President Lincoln believed that he proved to the world that democracy could be a lasting form of government. Lincoln was perhaps the most esteemed and criticized of the American presidents. "Of all the American presidents, Lincoln is probably the one about whom the most has been written. ...read more.

When he died any hope of this died with him. "Some such outcome may never have occurred even if Lincoln had lived; he never pretended to be a miracle worker; but his prestige, his wisdom, his political guile, would surely have shortened America's racial agony and mitigated its intensity." (Brogan 1999: pg 347) Abraham Lincoln is remembered for his vital role as the leader that preserved the Union during the Civil War, and began the process that led to the end of slavery in the United States. "Accomplishments achieved by acting "with malice towards none" in the pursuit of a "more perfect and equal union." (website: The American President) He is also remembered for his character, his speeches and letters, and as a man of humble origins whose determination and perseverance led him to the nation's highest office. "Lincoln was one of the truly great leaders in American history, he was a humane, far-sighted statesman. So much was the respect accorded to him and his career; he was elevated to the status of a legend and a folk hero after his death." (website: Lifestyle) Abraham Lincoln wrote some of the most memorable words in American history, he may have died in 1865, yet his words live on. "Nearly all men can stand adversity, but if you want to test a man's character, give him power." (website: brainyquote) Abraham Lincoln was not only one of the greatest of American Presidents, he was also a man with character. ...read more.