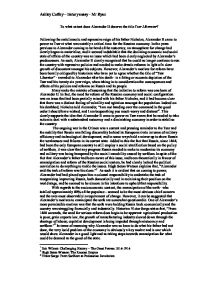 Does Alexander II deserve the title of 'Tsar liberator'?

﻿This document was downloaded from Coursework.Info - The UK's Coursework Database - http://www.coursework.info/ To what extent does Alexander II deserve the title Tsar Liberator? Following the anticlimactic and repressive reign of his father Nicholas, Alexander II came to power as Tsar at what was notably a critical time for the Russian economy. In the years previous to Alexander coming to be head of the autocracy, an atmosphere for change had clearly began to materialise, and it seemed indubitable that the declining economic and social state of affairs of the country was an issue which had been clearly neglected by Alexander?s predecessors. As such, Alexander II clearly recognised that he could no longer continue to run the country with repressive policies and needed to make drastic reforms in light of a clear growth of discontent amongst his subjects. However, Alexander?s motives for reform have been heavily critiqued by historians who have yet to agree whether the title of ?Tsar Liberator? - awarded to Alexander after his death - is a fitting or accurate depiction of the Tsar and his twenty-six year reign, when taking in to consideration the consequences and effects of his policies and reforms on Russia and its people. Many make the mistake of assuming that the initiative to reform was one born of Alexander II. In fact, the need for reform of the Russian economy and social configuration was an issue that had been partially raised with his father Nicholas, and it had become clear that there was a distinct feeling of volatility and agitation amongst the population. Indeed on his deathbed, Nicholas told Alexander, ?I am not handing over the command in the good order I should have wished, and I am bequeathing you much worry and distress?[1]. This clearly supports the idea that Alexander II came to power as Tsar aware that he needed to take action to deal with a substandard autocracy and a diminishing economy in order to stabilise the country. ...read more.

As spectacular and as empowering as the zemstva reforms appeared to be on the surface, they lost their impetus. On the basis of this reform alone, it would be unfair to give Alexander the title of ?Tsar Liberator?, as although it gave the peasants some feeling of control or power, it actually counted for nothing and the Tsar and gentry still maintained quite tight grip over the peasants. Not only did the zemstva reforms do little to help liberate the peasants and establish their citizenship rights, but it also had what is arguably an unintentional effect, in the beginning of a formation of the Intelligentsia, and the revolutionary and educated middle classes. This is clearly an unintentional and remarkably ironic effect of the reforms imposed by Alexander, as supported by Kemp, who says, ?The efforts of Tsarism to survive, and reform in order to conserve, inevitably increased the numbers of the educated and potentially critical?.[7] When one of Alexander?s clear motives to emancipate the serfs was to do so in order to avoid revolution and maintain tight control, it is paradoxical that in the ensuing reforms, he managed them so poorly and showed a complete lack of control and knowledge about the situation that it led to heightened antagonism towards him, the government and the autocracy, which was the one thing he desperately wanted to avoid. It can be strongly argued that there was a clear neglected opportunity over the organization of some type of a nationwide representative parliament or assembly, and as such Alexander made a futile attempt at trying to establish a firm base for a modernised autocracy. The unintentional effects of the zemstva reforms can be closely linked with the censorship reforms introduced by Alexander II at the same time. Moving distinctly away from his father?s repressive policies, Alexander?s censorship reforms were an initial relaxation of the harsh censorship regulations that had been imposed by Nicholas. Pre-publication codes were reduced and the media became allowed to discuss politics and government issues. ...read more.

He appeared to reform for the benefit of the peasants, yet when the effects of these new policies are looked at carefully, it is clear that Alexander?s main priority was to maintain the complete control that the autocracy had over the country and was unwilling to risk threat to his position as Tsar. Some historians maintain that what Alexander gave with one hand, he took away with another, which is supported by the fact that by the end of his reign, Alexander had gone back to being repressive to combat the effects and unpopularity that Alexander had not anticipated. Leroy Beaulieu says, ?The emancipation was followed by numerous reforms; administrative, judicial, military, even financial; yet all the reforms, prepared by different commissions subject to rival or hostile forces were undertaken in isolation, in an incomplete manner, without coherence and without a definite plan?[11]. Having explored the motives and the effects of Alexander?s reforms, and in comparison to how his reign did not have significant or lasting reforms, it is clear that the common acceptance by many historians of Alexander being the ?tsar liberator? is somewhat misleading, and that although it is fair to say that Alexander made clear and distinguished attempts to liberate, the title ?tsar liberator? overrates his influences as it is clear that Russia?s problems were not solved and the people were not in fact liberated to the fullest extent. This document was downloaded from Coursework.Info - The UK's Coursework Database - http://www.coursework.info/ ________________ [1] Eric Wilmot: Challenging History ? The Great Powers 1814-1914 [2] Hugh Seton-Watson: The Russian Empire [3] Victor Serge: From Serfdom to Proletarian Revolution [4] Alexander?s speech to Moscow Nobility ? cited in ?Tsarist Russia 1801-1917? by John Hite [5] Jonathan Bromley: Russia, 1848-1917 ? Heinemann Advanced History [6] M.S. Anderson, cited on www.cusd.ca.us [7] Kemp: Industrialisation of C19th Europe [8] Hugh Seton-Watson: The Decline of Imperial Russia [9] J N Westwood: Endeavour and Endurance [10] Mosse: Alexander II and the Modernisation of Russia [11] Leroy-Beaulieu: cited in Mosse: Alexander II and the modernisation of Russia ...read more.