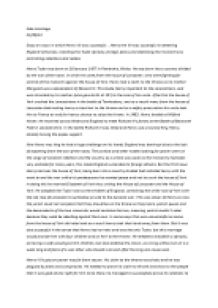 Essay on ways in which Henry VII was successful

﻿Kate Armitage 21/09/13 Essay on ways in which Henry VII was successful?Henry the VII was successful in bettering England?s finances, instating the Tudor dynasty, foreign policy and stabilising the monarchy by controlling rebellions and nobles. Henry Tudor was born on 28 January 1457 in Pembroke, Wales. He was born into a country divided by the war of the roses. In which he came from the house of Lancaster, who were fighting for control of the monarch against the house of York. Henry had a claim to the throne as his mother Margaret was a descendant of Edward III. This made Henry important to the Lancastrians, and was intrusted by his mother (who gave birth at 13!) to the care of his uncle. After this the house of York crushed the Lancastrians in the battle of Tewkesbury, and as a result many from the house of Lancaster died making henry a close heir to the throne and as a safety procuration his uncle took him to France to wait for henrys chance to seize the throne. In 1485, Henry landed at Milford Haven. He marched across Wales and England to meet Richard III's forces at the Battle of Bosworth Field in Leicestershire. ...read more.

Henry also faces other rebellions but was again successful in crushing them. His rule was tested and his claim to the throne was constantly dwindling but he had managed to expand the Tudor dynasty with 4 children and calm the situation greatly between Lancastrians and yorkists. After the 100 years’ war in France and the war of the roses, the country was bankrupt. Henry wanted to make the crown financially independent of Parliament. He received an annual sum from Parliament (Tunnage and Poundage), but was sometimes denied the desired amount. Firstly Henry confiscated the land of Yorkist rebels, and sold it. One of the ways Henry was most successful in earning money was the Bonds and recognises. Bonds and recognisances were agreements which the king could make landowners sign in which they would agree to pay a fine if they broke the agreement. This often involved agreeing not to fight a specific landowner. Nobles could have more than one bond – indeed 23 noble families were put in this position by Henry. The noble with the most bonds was the young Duke of Buckingham. An example is , In 1504 Lord Broke was forced to give a bond of £500 which would be forfeit if his servants fought with those of Sir Thomas Brandon. ...read more.

Henry married his son, Prince Arthur to the Spanish Catherine of Aragon, uniting the two. He consolidated his position with a treaty with France that opened up trade between the two countries. He arranged the marriage of his daughter, Margaret Tudor, to James of Scotland in order to secure peace between the two countries. Henry was successful in securing England?s future and protection against Invasions in which he also minimised the outcome for. In conclusion Henry was successful in many ways. He was the first king to leave the throne not in debt. He made England a prosperous country which exported many goods such as textiles. He didn?t start any wars which benefited him in not losing money but also increasing connections between other foreign powers. He used his children as bargaining chips with other countries which brought England many gains financially as well as its safety against wars. He brought back stability to the country after long time and united two houses with his marriage that conquered peace with most. He secured the Tudor dynasty; with a secure throne and heirs to carry on his legacy. He also controlled nobility who had caused most of the wars prior to henrys take of the throne. But to a harsh standard he controlled the nobility; in ways this made him unsuccessful it increased the risk on rebellion but also makes him lack strong alliances. ...read more.