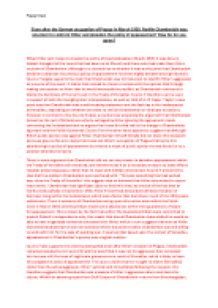 Even after the German occupation of Prague in March 1939, Neville Chamberlain was reluctant to confront Hitler and abandon the policy of appeasement How far do you agree?

﻿Poppy Steel ?Even after the German occupation of Prague in March 1939, Neville Chamberlain was reluctant to confront Hitler and abandon the policy of appeasement? How far do you agree? When Hitler sent troops to invade the centre of Czechoslovakia in March 1939, it was done in blatant disregard of the terms that had been set at Munich and those who had made them this is inclusive of Chamberlain. Although it is uncertain as to whether it was at this point that Chamberlain decided to abandon his previous policy of appeasement has been highly debated among historians. Source 7 largely supports the claim that Chamberlain was still reluctant to identify Hitler?s aggression as a source of the event. It claims that instead he chose to remain with the opinion that through making concessions to Hitler that he would eventually be pacified, as Chamberlain continued to blame the harshness of the terms set in the Treaty of Versailles. Source 7 therefore can be used in support of both the ?bungling man? interpretation, as well as, that of A.J.P Taylor. Taylor?s view point was that Chamberlain was a well-meaning statesmen and the fault lay in the inadequacies at Versailles, depending on whether one want to criticise Chamberlain or vindicate his actions. ...read more.

shown to be used as a means of expansion as the Nazis invaded the rest of Czechoslovakia), then it is more simple to see his failure in spotting that Hitler was unalterable in his aggressive plan of lebensraum. This is all in support of the idea that Chamberlain held reluctance to change his policy of appeasement merely based on Hitler?s actions alone, considering the context of his opinion of Hitler; he therefore believed there was the hope of peace. Arguably, in this light, the Polish Guarantee can be regarded as a deterrent against war with Hitler rather than a sign that Britain was not ready to go to war and remove the policy of appeasement, however Hitler was unfortunately not put off from his course of action. Source 8, however directly disagrees with the view that Hitler remained blind to Hitler?s nature, and in fact claims that it was turning point in Chamberlain?s views towards Hitler. It claims that ?Chamberlain was incensed? by Hitler?s latest action and that Britain saw it as a ?direct slap in the face? after the attempts Chamberlain had made to satisfy Hitler?s demands. His aggravation with Hitler suggests that he genuinely had trusted Hitler?s demands for self-determination and to stop there, as source 7 suggests, but unlike source 7 it shows that this trust ended here. ...read more.

However, the takeover of Czechoslovakia did not fit this justification, and it is likely that at this point it became clear to all that Hitler did not only plan on taking back lost territory, but it was about expansion, lebensraum as the German?s called it. Therefore, when Hitler made demands for Danzig, Chamberlain could see that Poland would be lost if Danzig was conceded to Hitler, and so the Polish Guarantee was Chamberlains way of telling Hitler ?no more?. Arguably in this case it was the invasion of Czechoslovakia that was pivotal in Chamberlain?s policy of Appeasement. In conclusion, although for much of Chamberlains time in office, he appeared to trust an untrustworthy dictator, as on the whole, Roberts in source 7 advocates, it seems that this trust was not enough to keep Chamberlain on the track of appeasement. Hitler made it obvious, whether to the public, as Kershaw believes, or like Ramsden argues, to both public and Chamberlain, that he had not planned on keeping to any agreement he had made, thus showing that he must be stopped by force. Taking this into account it would be fair to say that the events of March 1939 marked a turning6 point for Chamberlain?s policy as it became blatant that Hitler must no longer be appeased. ...read more.