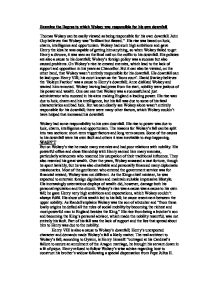 Examine the Degree to which Wolsey was responsible for his own downfall Thomas Wolsey can be easily viewed as being responsible for his own downfall. John Guy believes that Wolsey was "brilliant but flawed." His rise was based on luck, charm, intelligence and opportunism. Wolsey had such high ambitions and gave Henry the idea he was capable of getting him anything, so when Wolsey failed to get Henry a divorce, it was seen as the final nail on the coffin to his downfall. His policies are also a cause to his downfall; Wolsey's foreign policy was a success but also caused problems. On Wolsey's rise he created enemies, which lead to the lack of support and opposition in his years as Chancellor. But it can also be viewed, on the other hand, that Wolsey wasn't entirely responsible for his downfall. His downfall can be laid upon Henry VIII; his court known as the 'lions court'. David Starkey believes the 'Boleyn Faction' was a cause to Henry's downfall; Anne disliked Wolsey and wanted him removed. Wolsey having bad press from the start, nobility were jealous of his power and wealth. One can see that Wolsey was a successful and just administrator who succeed in his aims making England a leading power. His rise was due to luck, charm and his intelligence, but his fall was due to some of his fatal characteristics and bad luck. But we can clearly see Wolsey alone wasn't entirely responsible for his downfall; there were many other factors, which Wolsey couldn't have helped that increased his downfall. ...read more.

Anne and her family had sympathy with the religious views of the reforms. The ambitions and pretensions of Wolsey, the arch-pluralist, would have little appeal for them. It appears Anne had a little personal dislike for the chief minister and hoped he could have obtained the divorce. But as events unfolded between 1527 and 1529, she and her supporters were quick to blame Wolsey for every setback. So by 1527, Anne clearly had Henry under her influence and she knew how to exploit this. She gained support form the nobility who wanted to dismiss Wolsey from power so used Henry's frustration against Wolsey to make his fall. It can be seen that Wolsey wasn't all entirely to blame for his downfall; and there were inevitable causes which Wolsey couldn't have helped from happening caused his downfall. The poor relations with nobility, Henry's character and demands, Anne Boleyn are all factors will helped caused Wolsey's downfall. But it can be said that Wolsey did have some cause to his own downfall. His policies were a main cause to his downfall. The Divorce, Amicable Grant, his foreign policy and weakness in finance and abuse towards the Church were all causes Wolsey created and turned to his downfall. WAS One can argue that Wolsey's rise to power was a cause to his downfall; he made many enemies on his rise to power and therefore didn't have any support when needed. His harshness on his rise was a cause to his fall; the nobility resented his showing of wealth and wanted him destroyed. ...read more.

CONCLUSION Overall, looking at the evidence it can be seen that Wolsey did have some degree into his fall, but there are the other important trigger factors, which set off his fall, and he couldn't help from happening. Wolsey wasn't entirely and not hugely responsible for his own downfall; he was falling from the moment he was rising in power. When Wolsey rose to power he was born a son of a butcher and the nobility didn't like a lowly origin influencing the King. His lack of support and enemies made Wolsey's fall easier to occur, as the nobility used Henry's anger to dismiss Wolsey. But Wolsey did have some degree to his fall; his polices and gave Henry high ambitions for England which England was too narrow a field for his vast ambition. He aspired to be the arbiter of Europe. He threw England's influence on the side of the Holy Roman emperor, Charles V, in the latter's rivalry with Francis I of France. He expected thereby to enlist the emperor's aid for his own aspirations to become pope. Wolsey maintained the kings favour until he failed to secure an annulment of Henry's first marriage. From1527-1529, as Anne Boleyn's influence rose, Wolsey waned. She disliked the cardinal because of his interference in her earlier engagement to Henry Percy. And both she and King were increasingly impatient with the pope's endless prevarication. Torn between his secular and spiritual masters, Wolsey chose Henry's side-but it was too late. He was indicated for praemunire; and later confessed guilt. ...read more.