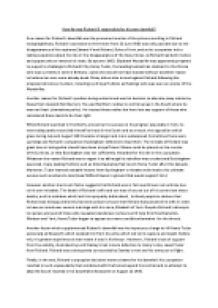 How far was Richard III responsible for his own downfall?

﻿How far was Richard III responsible for his own downfall? One reason for Richard?s downfall was the presumed murder of the princes resulting in Richard losing legitimacy. Richard?s accession to the throne from 26 June 1483 was only possible due to the disappearance of his nephews Edward V and Richard, Duke of York, and so his usurpation led to lasting suspicions about his role in the disappearance of the two princes, as Richard had both motive and opportunity to remove his rivals. By autumn 1483, Elizabeth Woodville was apparently prepared to support a challenge to Richard III by Henry Tudor, the leading Lancastrian claimant to the throne who was currently in exile in Brittany: a plan she would not have backed without excellent reason to believe her sons were already dead. ...read more.

reconciled himself to those in the South and as a result, the opposition which grew during July and August 1483 became stronger and more widespread. Sometimes there were uprisings and Richard?s companion Buckingham defected to lead them. The mistake of Richard was great here in losing what should have been a loyal friend. Blame could be placed on the murder of the princes, or that Buckingham was not sufficiently rewarded for his role in the usurpation. Whatever the reason Richard was to regret it as although his rebellion was crushed and Buckingham executed, many leading Yorkists such as Giles Daubeney fled to join Henry Tudor after this debacle. Moreover, Tudor learned valuable lessons from Buckingham?s mistakes wich lead to his ultimate success such as where to land (near Milford Haven in ground that would support him.) ...read more.

Despite Richard?s attempts to repress and punish those who repeated slanderous rumours with help from Southampton, Windsor and York, Henry Tudor began to appear as a more credible alternative for the throne. Another factor which supplemented Richard?s downfall was his impetuous charge to kill Henry Tudor personally at Bosworth which isolated him from his army which led to his capture and death. Before this, his greater experience at war meant it was in his favour. However , Richard?s lack of support from the nobility, illustrated by Lord Stanley?s last minute defection to Henry?s side, saved Tudor from Richard. Richard was consequently surrounded by Stanley?s men and his army put to flight. Finally, in the end, Richard?s unpopular decisions were to blame for his downfall. His usurpation resulted in such unpopularity that combined with the forces beyond his control and no attempt to allay the South resulted in his downfall at Bosworth on August 22 1485. ...read more.