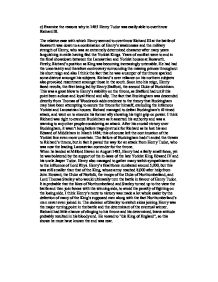 Examine the reasons why in 1485 Henry Tudor was easily able to overthrow Richard III.

c) Examine the reasons why in 1485 Henry Tudor was easily able to overthrow Richard III. The relative ease with which Henry seemed to overthrow Richard III at the battle of Bosworth was down to a combination of Henry's weaknesses and the military strength of Henry, who was an extremely determined character after many years languishing in exile having fled the Yorkist Kings. Years of conflict were to end in the final showdown between the Lancastrian and Yorkist houses at Bosworth. Firstly, Richard's position as King was becoming increasingly untenable. He had had the uncertainty and therefore controversy surrounding the missing princes throughout his short reign and also I think the fact that he was a usurper of the throne sparked some distrust amongst his subjects. ...read more.

Richard managed to defeat Buckingham's ill timed attack, and went on to execute his former ally showing his tight grip on power. I think Richard was right to execute Buckinham as it asserted his authority and was a warning to any other people considering an attack. After his crucial victory over Buckingham, it wasn't long before tragedy struck for Richard as he lost his son Edward of Middleham in March 1484; this of course left the continuation of the Yorkist line even more uncertain. The failure of Buckingham hadn't ended the threats to Richard's throne, but in fact it paved the way for an attack from Henry Tudor, who was now the leading Lancastrian contender for the throne. ...read more.

It is probable that the likes of Northumberland and Stanley turned up to the view the battle and then join forces with the winning side, to avoid the penalty of fighting on the losing side. I think Henry's route to victory was made a lot whole easier by the defection of many of the King's supposed men along with the fact Northumberland's men never even joined in. The decision of Stanley to switch sides joining Henry was the major turning point in the battle and the determinant of the eventual winner. Richard had little chance of clinging to his throne and his determined, brave attitude probably resulted in his bloody end. He vowed to "die King of England", so this shows he must have known the end was near. ...read more.