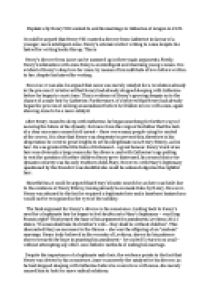 Explain why Henry VIII wanted to end his marriage to Catherine of Aragon in 1529.

﻿Explain why Henry VIII wanted to end his marriage to Catherine of Aragon in 1529. It could be argued that Henry VIII wanted a divorce from Catherine in favour of a younger, more intelligent Anne. Henry?s extensive letter writing to Anne despite his hatred for writing backs this up. This is Henry?s divorce from Anne can be summed up in three main arguments. Firstly, Henry?s infatuation with Anne Boleyn, an intelligent and charming young woman. It is evident of Henry?s deep love for Anne, by means of his multitude of love letters written to her, despite his hatred for writing. However, it can also be argued that Anne was merely catalyst for a revolution already in the process. ...read more.

He knew from the reign of his father that the lack of a clear successor caused civil unrest ? there were many people vying for control of the crown. It is clear that Henry was desperate to prevent this, therefore in his desperation he went to great lengths to set his illegitimate son, Henry Fitzroy, as his heir. He was granted the title Duke of Richmond ? a great honour. Henry?s lack of an heir was obviously a large reason for his divorce, and with Catherine?s age putting to rest the question of further children Henry grew distressed, his second choice for dynastic security was his only trueborn child, Mary. However, with Mary?s legitimacy questioned by the French it was doubtful she could be acknowledged as the rightful heir. ...read more.

This formed the base of his argument for annulment, Leviticus 20:21 states, ?If a man shall take his brother?s wife? they shall be without children?. This discounted Mary as successor to the throne ? she was the offspring of an ?unclean? marriage. Henry truly believed in the voracity of Leviticus, shown by his patience shown towards the hope in granting his annulment ? he waited 5 years to no avail ? without attempting any other, non-Catholic methods of ending his marriage. Despite the importance of a legitimate male heir, the evidence points to the fact that Henry was driven by his conscience, Anne was merely the catalyst for his divorce, as he had stopped sleeping with Catherine before he was in love with Anne, she merely caused him to look for more radical solutions. ...read more.