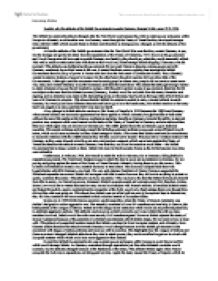 Explain why the attitude of the British Governments towards Germany changed in the years 1919-1924 The British Government's attitude changed after the First World war because they tried to retain power and peace within Europe to ultimately avoid another war. As Germany went through the Treaty of Versailles they developed stronger links with the USSR which caused threat to Britain and therefore as foreign policy changed, so did the attitudes of the government. At first the attitude of the British government after the First World War was that they wanted Germany to pay for the damage and get its fair share from the reparations of the Treaty of Versailles, 1919. However the government and Lloyd George also did not want to punish Germany too harshly; they should pay what they could reasonably afford. This was in order to retain trade links with them as this would only disadvantage British shipping if Germany was hit too hard. This attitude was furthered as the government did not want France to become a strong power and with Germany weakened due to their losses in the war, it ...read more.

The USSR gained from this as Germany gave technical expertise. This secret exchange and treaty scared the British government as these two powers were affiliated in such terms, which could cause a potential military disadvantage to Britain. This meant that Britain restricted its commitment to economic relations with the USSR because they felt they could not be trusted. This also led to a weaker relation with Germany as they were allowed to build up an army and produce weapons which was a term against the Treaty of Versailles therefore the attitude towards Germany was that they could not be trusted as much either - the British Government had to keep a watch on them. Britain felt more inclined towards France as the divide between two sides was noticeable. Furthermore, in February 1923, the French invaded the Ruhr in Germany due to Germany falling behind in reparations payments. The French and Belgian troops invaded this land to as an act as resistance to Germany for not paying and going against the terms of the Treaty of Versailles and ultimately forcing them to pay the money. ...read more.

This attitude of suspended isolation meant that Britain was kept far from European matters, and ultimately from German affairs therefore the attitude towards Germany would change because now the British government is less concerned with league of nation problems and more so with its colonies. This highlights how the League of Nations and Geneva protocol changed Britain's attitude as they tried to retain power, they could not afford to get too involved with European matters which which could turn more aggressive than desired. Overall the British Government's aim was to retain power and peace within Europe to avoid future conflict which could damage Britain. As Germany was taken through reparations just like other defeated countries would normally do, the attitudes changed because of the harshness of the treaty. This affected Britain again when France occupied the Ruhr due to reparations not being paid on time. Again the treaty caused the Treaty of Rapallo which let Germany secretly rearm with the aid of Communist Russia. This caused fear for the British as this could lead to further disputes. Kirandeep Dhillon ...read more.