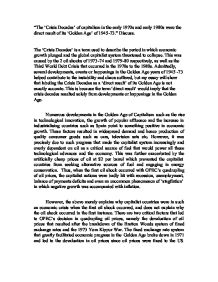 The 'Crisis Decades' is a term used to describe the period in which economic growth plunged and the global capitalist system threatened to collapse. This was caused by the 2 oil shocks of 1973-74 and 1979-80 respectively, as well as the Third World Debt Crisis that occurred in the 1970s to the 1980s. Admittedly, several developments, events or happenings in the Golden Age years of 1945-73 helped contribute to the instability and chaos suffered, but my essay will show that labeling the Crisis Decades as a 'direct result' of its Golden Age is not exactly accurate. This is because the term 'direct result' would imply that the crisis decades resulted solely from developments or happenings in the Golden Age. Numerous developments in the Golden Age of Capitalism such as the rise in technological innovation, the growth of popular affluence and the increase in industrialising countries such as Spain point to something positive in economic growth. These factors resulted in widespread demand and hence production of quality consumer goods such as cars, television sets etc. However, it was precisely due to such progress that made the capitalist system increasingly and overly dependent on oil as a critical source of fuel that would power all these technological advances and the economy. ...read more.

and Iran in 1980 caused the elimination of Iraqi oil exports. Thus, the two major oil exporters no longer exported oil and this resulted in a near tripling of oil prices, resulting in inflation and recession in the capitalist world. This deterioration in Middle Eastern affairs was however, not caused by developments and happenings in the Golden Age. The Third World debt crisis that threatened to collapse the global capitalist system was a situation in which many third world countries such as Mexico defaulted on their loans as they went bankrupt. This adversely impacted the seven of the nine largest banks in the world which provided the loans and created a situation in which the international financial system could be destroyed. There were many causes of the Third World debt crisis and some were directly related to developments and happenings in the Golden Age. A brief explanation for the cause of the crisis would be as follows. The export industry of the third world was very basic, low value-added and the value of their products and exports were worth very little. With the advent of the oil shocks, their exports further deteriorated in value since Western demand for their goods fell due to the recession in the West. ...read more.

Thus, the Crisis Decades should not be seen as a direct result of the Golden Age. In the case of the first oil shock, it was no doubt that the structural weakness of the capitalist economy, such as heavy reliance on oil, allowed the global economy to be in such a vulnerable position. However, it is also true that it was OPEC which decided to exploit this vulnerability for their private intentions. In the case of the Third World debt crisis, the oil shocks which occurred could be seen as the immediate cause, the critical factor that ignited the crisis. That happened on two accounts, the placing of Petro-Dollars in European banks which resulted in massive loaning as well as the fall in export earnings and rise in import prices. Whether or not we see the oil shocks as being a result of the Golden Age would then depend on our perspectives. Nevertheless, many developments during the Golden Age did facilitate and provide conditions for the Third World debt crisis to take place. However, there were fundamental weaknesses in the economies of the Third World countries that placed them in a peculiarly vulnerable position to the oil shocks, and developments in the Golden Age did not solely influence the outbreak of the debt crisis. "The 'Crisis Decades' of capitalism in the early 1970s and early 1980s were the direct result of its 'Golden Age' of 1945-73." Discuss. ...read more.