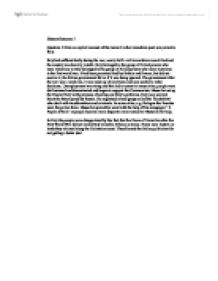 History Outcome 1 Question 1 Give an explicit account of the turmoil in the immediate post war period in Italy. Italy had suffered badly during the war, nearly half a million soldiers were killed and the country was heavily in debt. Italy belonged to the group of Allied powers who were victorious in Italy belonged to the group of Allied powers who were victorious in the first world war, it had been promised land by Britain and France, but did not receive it, the Italian government felt as if it was being ignored. The government after the war was a weak one, it was made up of coalitions and was unable to make decisions. Unemployment was rising and this led to unrest in many cities, people were disillusioned and discontented and began to support the Communists. Mussolini set up the Fascist Party with promises of sorting out Italy's problems. Italy was worried about the threat posed by Russia. He organised armed gangs called the 'blackshirts' who dealt with troublemakers and criminals. In some cities, e.g. Bologna the Fascists were the police force. Mussolini spread his word with the help of his newspaper ' Il Popola d'Italia' as people became more desperate more turned to Mussolini for help. ...read more.

This law stated that whichever party won the next general election would receive two thirds of the seats in Parliament. In April 1924 the Fascists won 60% of the votes and gained 375 seats out of 535. Mussolini emulated Hitler by creating the totalitarian state while removing basic democracy. Giacommo Matteotti the leader of the socialist party spoke out against the fascists he was consequently kidnapped and murdered. Mussolini was not involved but it was a warning for the future. In the next few years Mussolini set up a secret police force, the OVRA, and built concentration camps on the Lipari Islands for his opponents. Question 3 Accurately explain the impact of fascism on Italy on the following, Political developments, Social developments, Economic Developments and Ideological developments 2 points from each. Political Developments Fascism provided a stable government (12 months emergency powers) due to the Acerbo Law. In 1925 Opera Volontaria Repressione Ant-fascists - Volunteer Organisation for the Repression of Anti-fascism (OVRA) was set up, the Italian secret police. The death penalty was reintroduced. Italy was a diarchy, a state with two political heads, Mussolini and the King, although Mussolini did more or less what he liked, he chose his own ministers and the Grand Council met only at his command. ...read more.

Question 4 Explain fully what you consider to be the longer-term consequences of Italy's adherence to fascism. Long-term consequences of fascism in Italy include, a distrust of the political system, the people of Italy also became suspicious of each other. The 'Pact of Steel' was signed in 1939 this was an alliance between Italy and Germany; it committed each other to support any military action the other may take against another country. Hitler planned his attack on Poland, to ensure that Russia would not attack them, Germany signed a non-aggressive pact with Russia, this was done behind Mussolini's back, although he was delighted with it as he saw the three countries, Germany, Italy and Russia as a force to be reckoned with. However Russia was a major communist power and the people of Italy were disappointed with Mussolini's involvement. In 1946, Italians voted to dissolve the Monarchy, and then in 1948, the first political elections were held. Now labeled the First Republic, this 50-year period renewed Italian confidence in the process. Successes included improvements in public transport and success in the campaign against the Mafia, but the one major success was the ending of the conflict between the state and the church. (The establishment of the Vatican as an independent state). ...read more.